Tyler Frank’s fourth hit of the afternoon, a solo home run in the ninth, provided FAU with its final run of the afternoon in a 7-4 Florida Atlantic victory over Charlotte.

Reliever Mark Nowatnick blanked the 49ers for the final 3 1/3 innings, allowing only one hit, to improve to 3-0 on the season.

Tied 4-4 after six innings, FAU scored one run in each of the final three innings, proving the Owls’ margin of victory.

In the seventh, Jared Shouppe’s grounder to second base brought home Eric Rivera to give FAU a lead it wouldn’t relinquish.

Rivera gave FAU its next run when he doubled down the left field line, driving in Austin Langham.

Moving Forward: Starting pitcher Marc Stewart gave the Owls a chance to win the game by allowing only two runs on two hits and two walks in 5 1/3 innings. …Eric Rivera went 3-for-4, scoring two runs and driving in another. …Austin Langham had two hits, scored two runs and drove in two. One of those hits was his fourth homer of the season.

Sliding Backward: Drew Peden surrendered two runs, allowing a hit and a walk, in 1/3 of an inning. …Pedro Pages went hitless in four at-bats, striking out once.

Up Next: FAU goes for the sweep of Charlotte on Sunday. First pitch is scheduled for 12:30 p.m. 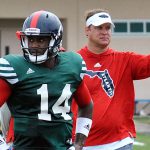