Spring Break
FAU football heads south on Saturday for a practice at Carter Park. Here's what to expect. 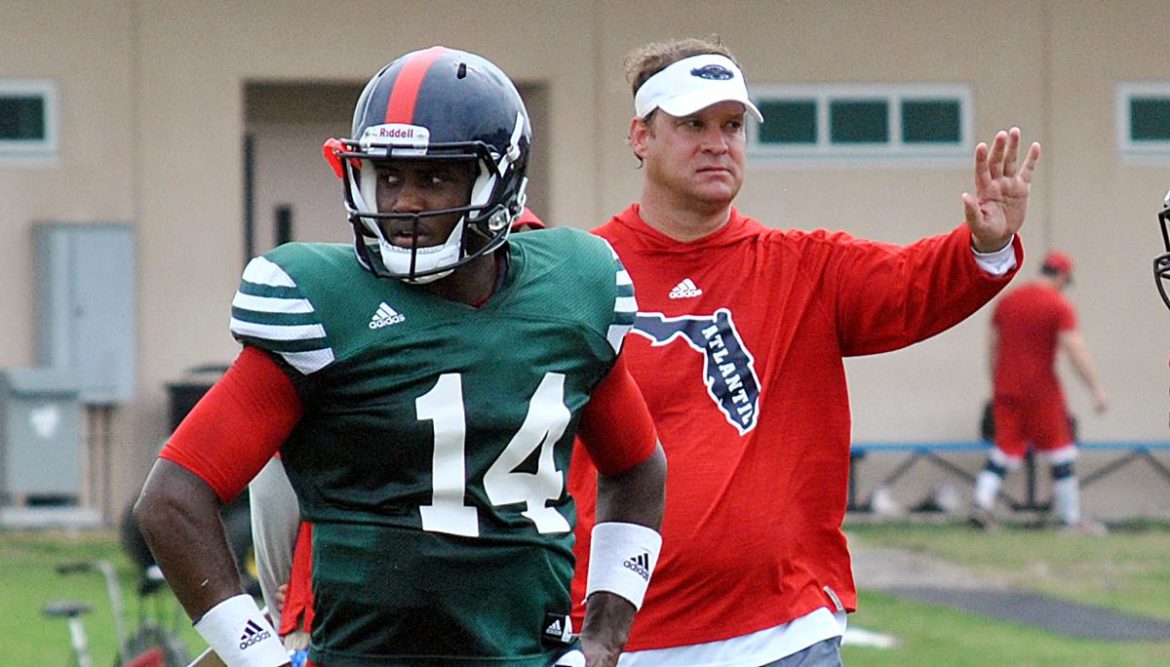 De'Andre Johnson, Lane Kiffin and the FAU Owls head to Carter Park for a practice on Saturday. (OwlAccess.com photo)

BOCA RATON – The South Florida community will get its first look at the new Lane Kiffin-led FAU Owls on Saturday during a practice held at Carter Park in Fort Lauderdale.

The Owls are expected to be on the field from noon until 2 p.m.

“I like to think our practices are pretty energetic, pretty fun to come to and exciting,” Kiffin said. “We’ve got a lot of good feedback from all the recruits that were here Saturday for the practice. I hope a lot of people come out. I think they’ll enjoy what they’ll see for a practice.”

This will mark the second consecutive spring that FAU has taken a practice to Broward County.

What will fans see on Saturday?

A QB Battle of Sorts: Transfer De’Andre Johnson has been running with the first team and looking strong. He throws a pretty deep ball and is elusive when running. Incumbent Jason Driskel doesn’t seem to have latched on the Kendal Briles system as quickly as Johnson has, despite the words of praise from Kiffin following Thursday’s practice. Fans can judge for themselves where they believe the battle stands.

Limited Linebackers: FAU is practicing using mostly two-linebacker sets. With Azeez Al-Shaair and Khantrell Burden not fully cleared to practice following offseason surgeries, Rashad Smith and Kris Harris comprise the first team unit. Harris is one of the most pleasant surprises of the spring, drawing praise earlier this week from Al-Shaair. Behind Smith and Harris could well be Jesse Howanitz, a walk on who is a converted wide receiver, and Hosea Barnwell, a freshman walk-on who joined the team in January.

A Large Lineman: Standing 6-foot-7 and 310 pounds, Matt Murphy certainly looks the part of a college offensive lineman. The transfer from Buffalo has been lining up at right tackle. Antonyo Woods is growing more comfortable at center and Reggie Bain is back at left tackle, at least for now. The versatile Matt Weiner is playing guard, with Brandon Walton at the other guard. Roman Fernandez is also part of that mix. Behind them? Only the most ardent followers of FAU football will recognize Jake Jones, Robbie Stewart and Jake Lassiter.

Darting DBs: With only two linebackers on the field, the Owls are usually playing five defensive backs. Safeties Jalen Young and Andrew Soroh return as starters from last season and don’t appear to have done much to lose those spots. Cornerback, however, seems to be an open competition. Raekwon Williams, Herb Miller and Shelton Lewis appear to be leading the way; but Chris Tooley, Korel Smith, Da’Von Brown and even freshman Quran Hafiz rotate in frequently. FAU will face plenty of spread offensives, so strength at corner would be a plus.

Wide-ranging Wideouts: Kiffin has praised the Owls’ wide receivers multiple times this spring. Kalib Woods still looks like the leader but Kamrin Solomon is enjoying a good spring. John Mitchell looks like he’ll offer a huge target, physically, and James Brunson is taking steps forward. Throw in familiar names like Nate Terry, Henry Bussey and, to some extent, Bobby Mitchell and this unit appears to be in good hands.

Running Wild: Even with the move of Georgia transfer A.J. Turman to linebacker, this unit remains deep. Buddy Howell and Devin Singletary are the clear leaders, but Kiffin also recently praised Kerrith Whyte, and Marcus Clark has a knack for making plays.