Keeping Pace
Changes at key coaching positions and at quarterback aren't causing FAU's offense to slow what it hopes will be a breakneck pace.

Coach Lane Kiffin says he liked the tempo of FAU’s offense last season and the personnel changes this spring haven’t caused him to pump the brakes.

“You wont see much difference from what you saw during the year,” Kiffin said. “It’s not as big a transition as you think.”

De’Andre Johnson and Chris Robison, the two candidates to replace quarterback Jason Driskel, aren’t falling behind. Johnson battled for the starting spot last season before surgery to remove blood clots in his arm ended his season after one game. Robison received a brief indoctrination to the Owls’ pace last fall before running the scout team.

To keep up the pace this spring the Owls still devote time each practice to playing fast.

“You’ve always got to practice it,” Kiffin said. “We have certain periods where we do it. You don’t want to get away from it and try to come back in the fall. It helps them get in better shape and it helps the defense.”

FAU’s defensive line has overwhelmed the Owls’ offensive line much of the spring, but during the run period the offense did hit a couple of big runs.

“Which is good to see because we have not had a lot of those,” Kiffin said.

Making Plays: Defensive back Da’Von Brown smothered running back D’Anfernee McGriff in the hole during the team run period. …McGriff took another big hit about an hour later when linebacker Hosea Barnwell blasted him on a screen pass. …Herb Miller made a quick break on a pass near the goal line to break up a De’Andre Johnson pass intended for Willie Wright. …Defensive end Leighton batted down a Chris Robison slant. …Defensive tackle Will Davis batted down a Johnson pass at the line of scrimmage. …Linebacker Andrew Soroh delivered the biggest defensive play of the morning by bursting through the line untouched and tagging Devin Singletary for a safety.

QB Battle: Chris Robison spent more time with the first team that he had in previous practices, but the offense still moved better under Johnson. During the team run portion, Johnson faked a handoff, rolled left and threw a perfect pass to tight end Harrison Bryant along the sideline. Johnson struggled with such completions last fall.

Instant Message: “Gerald Hearns really has stood out and he has really put himself right there in the battle for the second spot.” – Lane Kiffin discussing the play of running back Gerald Hearns 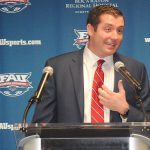 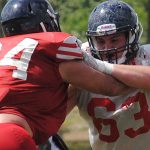 Why isn’t anyone talking about Conor Miller, the 6’4″ gunslinger whose got a better arm and better head than both Johnson or Robison? Threw a TD and ran for another on Saturday. You better watch him.