A five-run third inning provided Miami with more than enough runs to defeat FAU 8-2 on Wednesday in Coral Gables.

The victory gave the Hurricanes a three-game season sweep of the Owls.

Miami starting pitcher Sean Labsan didn’t make it out of the third inning. He surrendered a run in the first and two more in the second. He exited the third inning with the bases loaded and no one out.

Nick Prather entered the game and retired the first two batters he faced – one on a sacrifice fly – but couldn’t get the third out until four more runs had scored.

Trailing 1-0 after the first, Stephen Kerr tied the game with a solo home run to left in the second.

Esteban Puerta supplied the only other FAU run with a sacrifice fly to center in the sixth that drove in Tyler Frank.

Moving Forward: Austin Langham went 2-for-3, the only Owl with multiple hits. …Frank went 1-for-3 with a walk and scored a run. …Relievers Blake Sanderson, Mike Ruff, Eric Keating and Nick Swan combined to throw five shutout innings without allowing a hit.

Sliding Backward: FAU had hoped Labsan would show he was ready to move to the weekend rotation. After allowing four hits and walking four more in two-plus innings, coaches can’t be too optimistic. …David Miranda went 0-for-4 with two strikeouts and committed an error.

Up Next: FAU hits the road for a C-USA weekend series at Texas-San Antonio. First pitch on Friday is scheduled for 7 p.m. 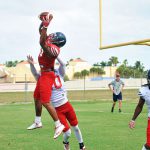 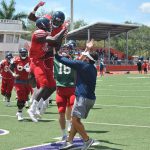