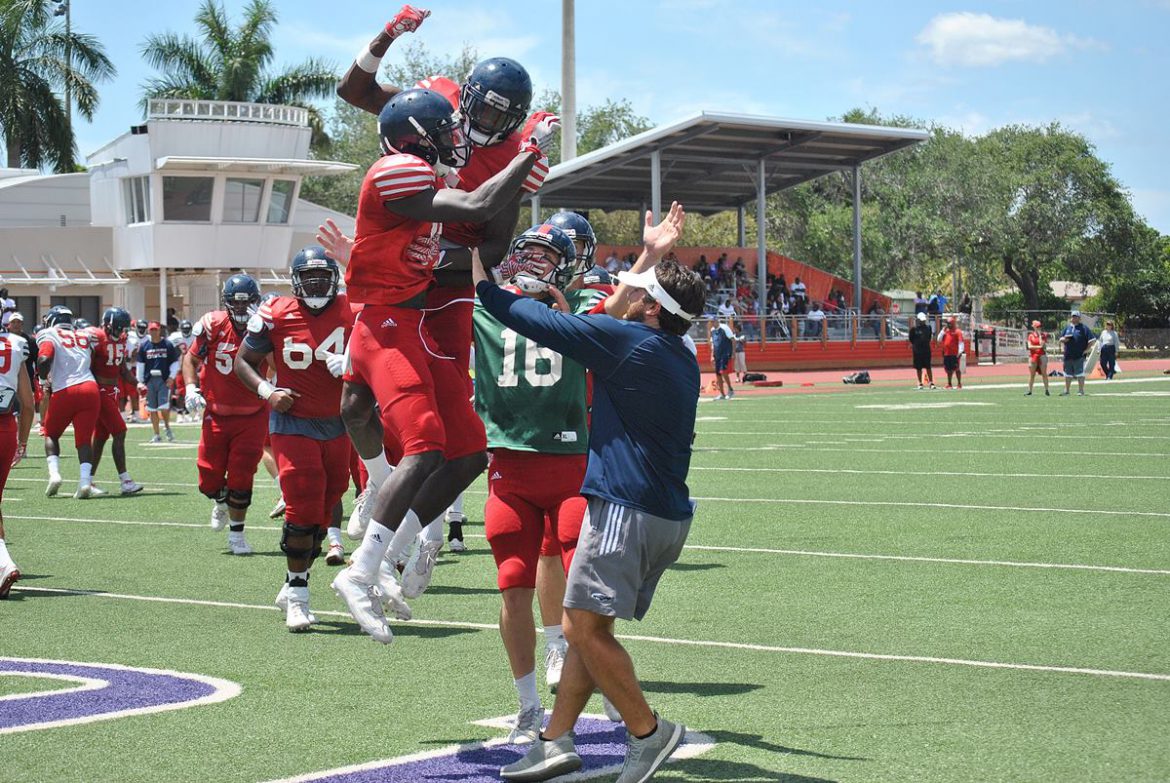 Last year’s statistics alone would lead any observer – no matter how seasoned – to a similar conclusion.

Kalib Woods led the Owls last season with 68 catches for 934 yards. The next best receiver, statistically, was Henry Bussey, with 24 catches for 269 – with 84 of those yards coming on a single play.

To his surprise, though, Kiffin’s discovered this spring that while the talent among FAU’s wide receivers may not be exactly where he wants it, there’s much more to work with than he originally feared.

Early in the spring Kiffin came to the same conclusion Woods did last year – FAU’s wide receivers lack of production last season wasn’t caused by a lack of talent.

“This spring the receivers are showing what I was talking about all last year,” Kalib Woods said. “From top to bottom the whole depth chart has stepped up and made improvements.”

Woods remains the leader of the unit, but through 13 practices Solomon looks like the big play threat.

“I think he’s having the best spring out here, probably on the team,” Woods said of Solomon. “I think he’s got his confidence back.”

Solomon’s change his approach to spring practice and it’s paying off.

“I come out to practice, every day my goal is to either score a touchdown or have a big play,” Solomon said. “At least one. If I don’t have that I feel like I haven’t gotten better in the day.”

Both Woods and Solomon credit Briles with giving them more freedom on their routes, allowing them to find open spaces on the field, which offers their quarterbacks better passing lanes.

“Honestly, I think it’s an amazing offense,” Woods said. “It’s different. We have a lot of freedom just to be football players.”

With FAU holding a team scrimmage portion for every practice, there have been plenty of opportunities for receivers to make plays. Seemingly every day a different pass catcher takes advantage of the opportunity.

Speedster Bobby Mitchell, a redshirt senior who began his career as a defensive back and has yet to catch a collegiate pass, rose from the scrap heap to catch two touchdowns during FAU’s April 8 scrimmage in Fort Lauderdale. He’s now battling for the starting wideout spot opposite Woods.

Senior Henry Bussey, who is behind Solomon at slot receiver when the Owls employ a three-wide receiver set, made tough catches, some for long gains, in each of the past three practices and suddenly looks like a threat. Another slot receiver, James Brunson, isn’t a starter but he’s made some plays in recent practices – including a long catch and run for a score on Tuesday.

Sophomore John Mitchell, for the moment the starter on the opposite side of Woods, is a big target that cornerbacks are struggling to bring down.

“He does make some plays,” Kiffin said.

Terry, a senior, gives the Owls an experienced possession receiver along with a red zone threat. Harrison, a redshirt sophomore has been steady behind Woods.

“The thing about it is it’s not going to be as important who starts in this system because you go so fast, so guys play,” Kiffin said. “You’re going to have six to eight guys playing every game and probably six guys that play a lot of snaps. That’ so that they can be fresh and they can play really fast later on.” 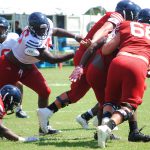