All The Rage
FAU and Marshall didn't exchange punches during their seventh-inning skirmish, but the Owls did beat up on the Herd's bullpen in a 12-6 victory. 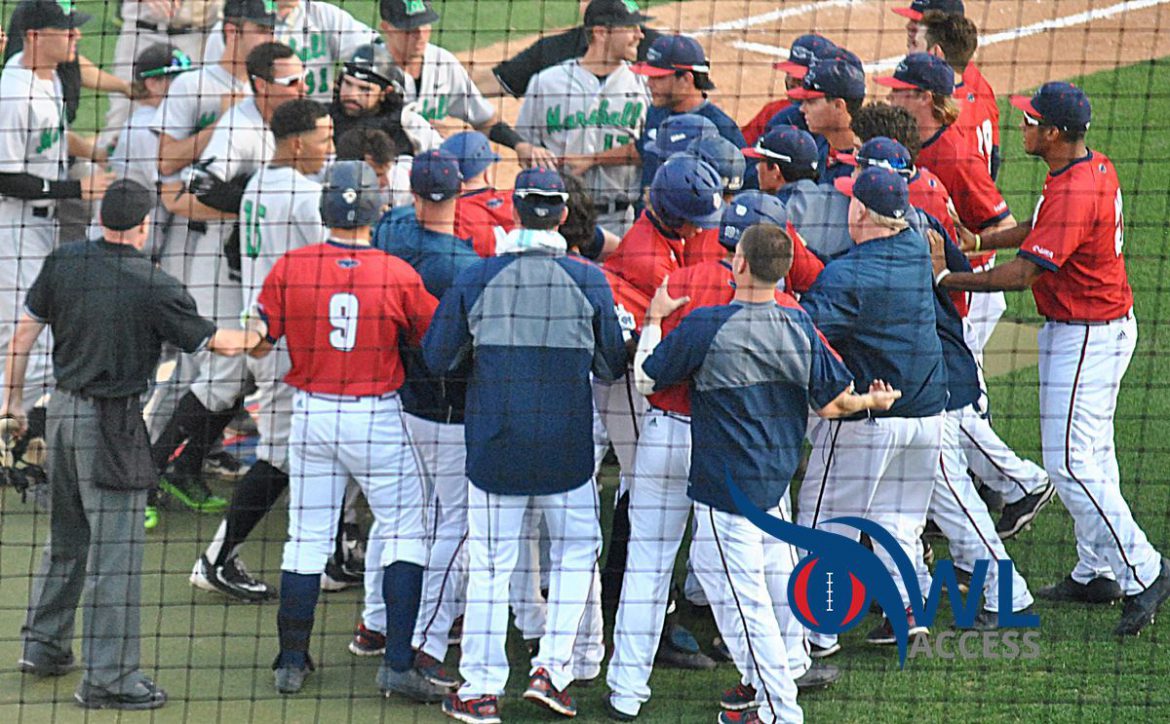 Coaches and umpires restrain players from FAU and Marshall after dugouts cleared in the seventh inning of FAU's 12-6 win.

BOCA RATON – A seven-run seventh inning that featured two ejections and a dugout-clearing dust-up propelled FAU past Marshall 12-6 on Saturday.

What had been a slow, even tedious, Conference USA contest exploded to life when Marshall went to its bullpen to begin the seventh inning.

FAU already had scored six runs in the seventh when Tyler Frank, lined a double to right center. Eric Rivera raced home from second and moments after touching the plate turned and stood face-to-face with Marshall catcher Reynaldo Pastrana, both players yelling. As the ball returned to the infield, Rivera pushed Pastrana.

“I guess there were some words exchanged and then a little shoving,” FAU coach John McCormack said. “I thought the umpires did a nice job. I thought both coaching staffs did a good job that it didn’t escalate.”

FAU catcher Kevin Abraham sprinted out of the dugout to Rivera’s defense, and both dugouts emptied. McCormack raced out to restrain Abraham and Rivera.

“I grabbed both those guys by their jersey to pull them back and I looked up and (Marshall’s) whole group was out there and their pitching coach was trying to get in front of them,” McCormack said. “You don’t often see that in college baseball these days.”

No punches were thrown and there were no ejections following the skirmish.

FAU did not make Rivera or Abraham available to the media.

“I just think it’s competitive guys,” McCormack said. “They want to win. Things are said and things are done. It kind of gets people sideways a little bit.”

FAU entered the seventh trailing 6-4, but when Eric Rivera’s one-out single drove in Pedro Pages and Jordan Poore the Owls assumed a 10-6 lead. Pages scored on the play after Marshall center fielder Shane Hanon over threw third base. As Pages sprinted home, Marshall pticher Matt Reed, who had allowed all six runs to that point in the inning, said something to home plate umpire Chuck Busse – who immediately ejected Reed from the game.

Busse then ejected Marshall coach Jeff Waggoner, who came out to argue the ejection. Waggoner exited the dugout out the back door, heading to the bus. Moments later the rest of the Herd thundered out of the front of the dugout and onto the diamond to confront Rivera.

FAU administrators, staffers and at least one police officer helped restore order. Umpires issued warnings to both teams, warnings that will carry over to Sunday’s game between the two schools.

“Anything that’s said, they’re not going to give a warning, they’re just going to turn and eject somebody,” McCormack said.

Entering the bottom of the seventh inning down 6-4, Frank led off the inning with a solo home run to left field. Jared Shouppe was hit by a pitch, took second on a passed ball, and scored the tying run from third on David Miranda’s double down the right field line. Austin Langham’s double to right drove in Miranda, giving the Owls their first lead.

Marshall took an early lead with four runs in the first and didn’t surrender the lead until that seven-run seventh.

Stephen Kerr scored on Langham’s bouncer to third in the eighth to complete the scoring.

Reliever Mark Nowatnick improved to 4-0 on the season for FAU by allowing only one hit and striking out three over four shutout innings to close the game.

“Mark was sensational,” McCormack said. “He was really good.”

Moving Forward: Tyler Frank’s seventh homer of the season started FAU rolling in the seventh. His double later that inning capped a three-hit afternoon. …The box score shows that Pedro Pages went 0-for-1, but Pages drew two walks, was hit by a pitch, drove in a run and scored twice. He also brought as loud a cheering section as FAU has seen this year. …Blake Sanderson allowed some action on the base paths, but he didn’t surrender a run in his 1 2/3 innings.

Sliding Backwards: Stephen Kerr was 0-4 and was the only Owl in the starting lineup not to record an RBI, but he stole two bases…. FAU only drew four walks while striking out seven times.

Key Stat: 67 – pitches thrown by Stewart in his 2 1/3 innings of work. If FAU wants to win games down the stretch, they’ll need more efficient outings from their starting pitchers.

Up Next: FAU and Marshall will close out the series on Sunday. First pitch is set for noon.

All The Rage
FAU and Marshall didn't exchange punches during their seventh-inning skirmish, but the Owls did beat up on the Herd's bullpen in a 12-6 victory.
was last modified: April 16th, 2017 by Chuck King
0 comment
2
Facebook Twitter Google + Pinterest 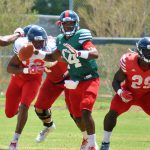 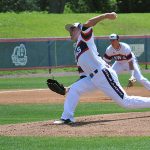