BOCA RATON – The progress hasn’t exactly been smooth, but De’Andre Johnson took another step toward becoming the starting FAU quarterback during Saturday’s scrimmage.

“I think De’Andre had his best day today of all the practices,” FAU coach Lane Kiffin said.

A transfer from East Mississippi CC, Johnson is battling incumbent Jason Driskel to be the Owls’ signal caller.

With the quarterbacks trying to master new offensive coordinator Kendal Briles’ scheme, the spring has featured stops and starts from both.

Driskel has been the more consistent quarterback, but Johnson has both substance and flash.

And when the Owls go to live game-like situations like Saturday’s scrimmage, Johnson’s ability to turn bad plays comes to the forefront.

“In talking with the guys that had him last year they said the same thing,” Kiffin said. “When the lights come on he really performs well.”

The battle may carry over past the Owls’ April 22 spring game and into the fall. Kiffin says he hasn’t set a timeline for naming a QB.

“It’s going to happen when it happens and the sooner the better for your team but also you have to make the right decision,” Kiffin said.

Some other nuggets from Saturday: 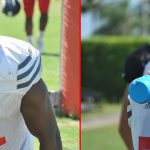 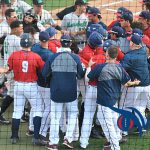