FAU players mob David Miranda after he scored the winning run on a wild pitch by FIU. (OwlAccess.com photo)

BOCA RATON – FAU didn’t put the ball in play even once during the ninth inning but still scored a walk-off 4-3 victory over rival FIU.

David Miranda began the inning by getting hit in the helmet by a pitch. He advanced to second on a wild pitch and to third on another. Following Esteban Puerta’s walk, Miranda raced home on yet another wild pitch with the winning run.

“This is our first kind of bottom-of-the-ninth win all year and sometimes guys don’t know how to react if they haven’t been in it,” FAU coach John McCormack said. “I’m glad it came out our way.”

With the wind blowing out to right, FIU victimized FAU starter Alex House for a couple of home runs.

JC Escarra started the scoring with a deep fly ball in the first inning that barely cleared the right field fence. With the Owls leading 2-1 in the fourth, Zach Files launched a no-doubt two-run homer to right that gave the lead back to FIU.

House allowed three hits and a walk while striking out two in 7 2/3 innings.

“Alex made three mistakes – a home run, he hit the guy in the foot and then a home run,” McCormack said. “Then after that I thought we pitched great. We played clean defense.”

With the game tied 1-1 in the third, FAU threatened to break the game open when the Owls loaded the bases with no one out. FAU, though, only managed to plate one, that coming on a Stephen Kerr sacrifice fly.

Miranda set up his own heroics by tying the game at 3 in the seventh with a solo homer over the bullpen tree house.

Moving Forward: Kevin Abraham enjoyed the first three-hit game of his career and drove in the Owls’ first run. …Esteban Puerta went 3-for-4 with a run scored. …Reliever Drew Peden allowed a single and hit a batter, putting two on with one out in the ninth, then struck out the next two batters to set up the walk-off. With the win Peden improved to 4-0 on the season.

Sliding Backward: Centerfielder Jordan Poore when hitless in four at-bats, striking out twice. He did make some nice defensive plays in left field, through. …Austin Langham went 0-for-3, drawing a walk.

Up Next: FAU and FIU play the middle game of their weekend series on Saturday. First pitch is scheduled for 4 p.m. 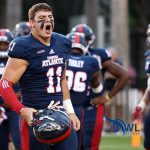 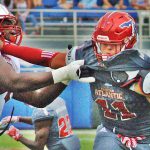