Down by two in the bottom of the ninth, Eric Rivera blasted a two-out grand slam to propel FAU to an 11-9 victory over Miami in Coral Gables.

The homer capped a six-run ninth that gave the Owls their second win over the Hurricanes in as many tries this season.

“That’s why we play the game,” coach John McCormack said. “We always say it’s never over ’til it’s over, especially in baseball. Guys didn’t give up, they kept grinding, they believed in each other and it was fun to watch.”

The slam was the final blow in a four-hit night for Rivera, who drove in five runs and scored two more.

A seven-run fourth inning gave Miami an 8-2 lead. Miami led by as many as seven runs before FAU mounted its comeback.

FAU scored a run in the sixth and two more in a seventh inning highlighted by Cody Wilson’s lead-off home run.

The Owls loaded the bases with one out in the ninth before David Miranda’s RBI single to left trimmed the Hurricanes’ lead to 9-6. A Joe Montes sacrifice fly shaved another run off Miami’s lead, but left the Owls down to their final out. Andru Summerall was then hit by a pitch, setting up Rivera’s heroics.

FAU will attempt to sweep Miami when the two teams meet on April 4 for the final time this season.

Moving Forward: David Miranda had three hits, drove in two and scored twice. …Tyler Frank went 2-for-4 with two runs scored, extending his hitting streak to 16 games. …Cody Wilson recorded two hits, scored two runs and drove in two. …Zach Schneider retired the side in order in the ninth to record his seventh save. …After struggling mightily for much of the season, Weston Clemente worked a clean eighth inning to earn the win.

Up Next: Southern Miss comes to Boca Raton on Friday for a three-game series that could have Conference USA regular season title implications down the road. First pitch on Friday is scheduled for 6:30 p.m. 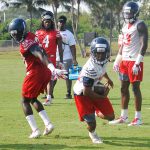 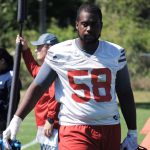