Let’s Be Frank
After a year out of water at catcher, Tyler Frank is back at shortstop for FAU, filling the roll played last season by one of the best players in program history. 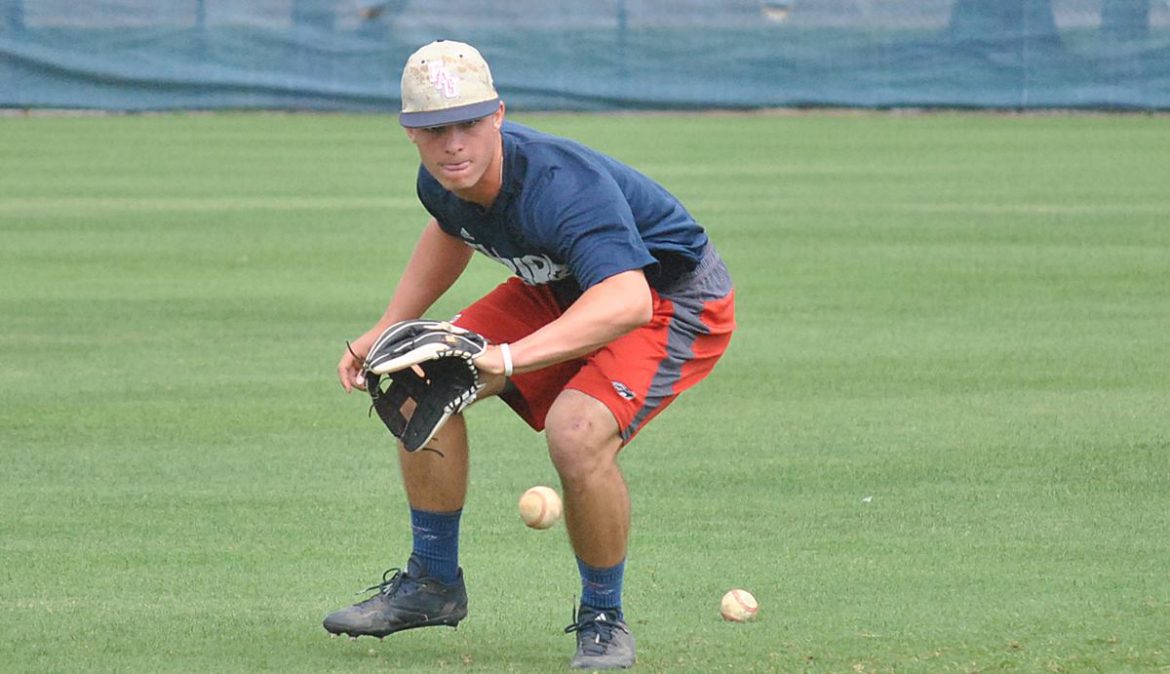 BOCA RATON – Tyler Frank is taking off the mask. And the chest protector. And the leg guards.

Thrust into the catcher position last season following a string of player losses that included Kevin Abraham begin diagnosed with cancer, Frank returns to his former position, shortstop, for FAU this season.

“I feel like I’m back home – comfortable and just ready to go for the season,” Frank said.

While he called last season “a good experience,” Frank was eager to totally commit to short. After the first practice, McCormack asked Frank to bring back his catching gear so that one of the team managers could help behind the plate.

Last season Frank drew attention as people watched to see whether he could learn a new position at the collegiate level. This year people will be watching to see whether he’s an able replacement for one of the best players in FAU baseball history – C. J. Chatham.

Interested parties received glimpse of what to expect during the NCAA Tournament’s Miami Regional last year, when Frank displayed a deft glove, strong arm and proficiency at the plate when called upon to replace the injured Chatham. His first career home run propelled FAU its lone victory of the Regional.

Though brief, the appearance offered Frank with a jumpstart on this season, which begins on Friday with Monmouth coming to Boca Raton for a three-game weekend series.

“I feel like it helped me a lot,” Frank said. “If you think about it, it’s the biggest game I’ve played so far. Being in a regional, it’s about as big as it gets other than a super regional or Omaha. I feel like that’s prepared me for any game possible. So if I can do it in that game, I’ll be able to do it in any of those games.”

A few days after Long Beach St. eliminated FAU from that regional, Boston selected Chatham, C-USA’s Player of the Year, in the second round of baseball’s draft.

Calling Chatham “the best player I’ve ever played with personally,” Frank spent as much time as possible last spring sneaking away from his catching gear to pick Chatham’s brain about the shortstop position. That relationship continued throughout the fall and into spring.

During the fall McCormack considering moving Frank to second base and sliding Stephen Kerr, a three-year starter at second, over to short.

Deciding the move would cause two players to learn new positions both this year and next year with Franks inevitable move short, McCormack elected to give Frank the job at the toughest infield position in baseball.

Having Kerr as his double-play mate, along with returning starters Austin Langham and Esteban Puerta as third and first respectively, should offer a level of stability to the Owls’ infield.

“All three of these guys coming in, they’ve made me comfortable right away,” Frank said.

Frank hit .285 with that one home run and 27 RBI last season as a freshman, statistics that should improve this season because of experience along with the removal of the wear and tear that came with catching 40 games.

The return of right fielder Jared Shouppe’s who missed all of last season because of a knee injury and the addition of Gary Mattis and Eric Rivera in the left and center field respectively should bring power to the plate, so Frank won’t be asked to replicate Chatham’s .357 average with eight homers and 50 RBI from last season.

“I’ve had three conversations with him about it,” McCormack said. “Remember that you’re Tyler, he’s C.J. You’re not trying to emulate him. Just play your game.”

Owls at a Glance

Fri: Alex House, Jr, RHP: Junior righthander Alex House will get the ball for Friday’s season-opener against Monmouth. He appeared in 23 games last season – all in relief – going 2-1 with a 3.13 ERA.

Sat: Jake Miednik, Jr, LHP: May have better pure stuff than House. The JUCO transfer will be making his FAU debut.

Stephen Kerr, Sr, 2B: This time last year most observers figured Kerr would be playing professionally by now. Struggles at the plate down the stretch – he finished the season batting only .253 – caused his draft stock to drop. Kerr hit better than .300 over his first two seasons. A return to that form would be huge for the Owls.

Esteban Puerta, R-Sr, 1B: Led the Owls with 10 homers last season. Provides another experienced player in the infield.

Sean Labsan, Sr, LHP/DH: A pectoral strain has slowed Labsan’s progress on the mound this spring so he will begin the season as the Owls designated hitter. He could provide a major boost to the rotation down the stretch.

KEY NEWCOMERS
Jake Miednik, Jr, SP: Junior college pitcher of the year in 2016 after going 13-1 and striking out 14.35 per nine innings.

Gary Mattis, Fr, OF: Naturally a middle infielder, is moving to left field in part to get his bat into the lineup. Perhaps generously listed at 5-foot-11 and 185 pounds, Mattis is compact but powerful.

Instant Message: “We’re going to be able to win baseball games in a lot of different ways. We can hit. We can run. We have a great defensive team. I feel like all aspects are really covered this year. We don’t have any holes.” – FAU shortstop Tyler Frank.

Let’s Be Frank
After a year out of water at catcher, Tyler Frank is back at shortstop for FAU, filling the roll played last season by one of the best players in program history.
was last modified: February 17th, 2017 by Chuck King
0 comment
0
Facebook Twitter Google + Pinterest