Photo Gallery:
WKU 52, FAU 3
What does a 49 -point FAU loss look like? Here's our photo gallery from Saturday's game.

BOCA RATON – FAU debuted gray uniforms under gray skies in what would become a dark day against Western Kentucky.

The Hilltoppers handed the Owls their worst loss ever at Howard Schnellenberger Field, dismantling FAU 52-3.

While the game wasn’t petty for FAU fans, some of the images came out nicely. Here’s a massive photo gallery that includes a couple of Jake Stoshak, several of Trey Hendrickson and a tighter look at some of the new faces on the defensive line.

The loss dropped FAU to 1-7 on the year and ensured the Owls won’t be going bowling. FAU still has two more games remaining on the schedule, beginning on Saturday with a trip to Rice. Kickoff from Houston is slated for 3:30 p.m. 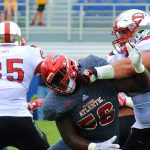 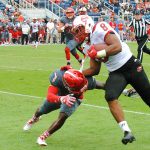