De’Andre Johnson threw for one touchdown and ran for another. Jason Driskel threw for two scores. Bobby Mitchell was on the receiving end of two of those scores.

Above is a photo gallery with some of the shots from FAU’s Carter Park scrimmage. To see more photos, check us out on Facebook at OwlAccess (Don’t forget to Like us).

Below are some of the tweets from OwlAccess.com. If you are not already, follow us on Twitter @FAUOwlAccess. 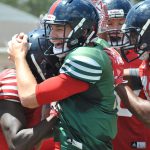