FOUR DOWN TERRITORY:
Spring Game
What was the biggest surprise at FAU this spring? Who was the spring MVP? Those questions and more answered here.

Lane Kiffin’s first spring ended on Saturday with the defense blowing out the offense in FAU’s spring game. In our post-spring edition of Four Down Territory, our Chuck King, Jake Elman and Karla DeVivo break down what they saw over the course of the 15 practices and what can be expected in the fall.

BIGGEST SPRING SURPRISE
King: That FAU will enter fall camp with a quarterback battle. When former Florida St. quarterback De’Andre Johnson came to FAU popular sentiment held that he would be handed the starting quarterback job. Through the first few weeks of practice Johnson appeared primed to nab the spot. But incumbent Jason Driskel steadily improved throughout the spring and significantly outplayed Johnson in the spring game. Johnson will still probably start in the opener against Navy, but it’s far from a certainty.

Elman: Hosea Barnwell’s play at linebacker. In a little over a month, Barnwell – who had committed to Buffalo and Syracuse in the past and was preparing to walk-on at UCF for next season – went from a walk-on at FAU to a key contributor on the defense this spring. At a position ravaged by injuries as Khantrell Burden and Azeez Al-Shaair each missed all of camp, Kris Harris missed the last few practices and starter Nate Ozdimer gave up football, Barnwell proved a great find for the Owls and ended his first camp with a strong showing in the spring game.

DeVivo: Through the countless injuries at linebacker Jacob Douglas remained quiet throughout the spring. After starting three games last season, Douglas spent much of the spring far removed from the two deep. Douglas moved up to the second team during the final week of practices following the injury to Kris Harris but was credited with only one tackle on Saturday. He did grab in interception, though.

SPRING MVP
King: Wide receiver Kamrin Solomon consistently performed at a high level throughout the spring. He capped the effort with a second-half touchdown in the spring game. The senior exudes confidence and is making plays in the slot. It looks like Kendal Briles’ offense is tailored to Solomon, who figures to be even more involved in the offense – in more creative ways – once the season kicks off.

Elman: Jason Driskel entered camp at risk of becoming a forgotten man, but he showed heart and refused to let Johnson’s arrival deter him in the quarterback battle. Making plays with his arm and legs all spring, Driskel showed off the skills that allowed him to beat Daniel Parr in last year’s quarterback competition and, like Barnwell, ended camp with a fantastic outing in the spring game. Throwing for three touchdowns and avoiding the mental mistakes that plagued him late in games last year, Driskel’s performance will only intensify the talk about who will be the starting quarterback come Sept. 1.

CONTROVERSIAL DECISION
King: New coach Lane Kiffin didn’t want to show too much in the spring game so he and Briles limited the playbook. As a result fans saw a relatively boring offense on Saturday. That’s a shame. Briles’ offense has been fun to watch this spring. It’s more wide open than the Owls have ever been. Showing a little of that flash would have left fans – and would-be ticket buyers – salivating for more. As it was, many left Howard Schnellenberger Field wondering what, if anything, had changed.

Elman: FAU needed to do a better job of marketing the spring game to students and those around campus. It wasn’t until late in the week that there were even signs for the spring game around campus, leading to a less-than-stellar number of student fans in the crowd. On a Saturday prior to finals and with Lane Kiffin making his unofficial coaching debut at FAU Stadium, a larger fan presence from students was expected but did not come about. Kiffin did joke about the lack of fans after the game, but with all of the national attention that the school has received in recent months regarding its newest football coach, the lack of students in attendance was disappointing.

DeVivo: Many believed that JUCO transfer De’Andre Johnson would automatically start because of his skill, but Jason Driskel, who is no stranger to the position’s competition, held his own throughout spring and managed to be the only quarterback on Saturday to throw passes that resulted in touchdowns.

EXTRA POINT
King: The most important addition to Kiffin’s staff isn’t technically a coach. Monte Kiffin, Lane’s father, is listed as a defensive analyst, but he’s more than that. Those around the program say Monte serves as a stabilizing force in the office, keeping his son and the other coaches focused on responsibilities both on and off the field. And the famed NFL defensive coordinator provides a wealth of defensive knowledge. His importance shouldn’t be overlooked.

Elman: For as much as the offense struggled to consistently get things going on Saturday, Devin Singletary shined on his seven carries, juking and spinning for 52 total yards. It’s early, but all of the hype concerning how Singletary, who rushed for over 1,000 yards last year despite not getting the bulk of the carries until the end of October, would perform in Kendal Briles’ new offense seems to be justified. While Buddy Howell was nicked up toward the end of camp and only had one carry on Saturday, the improvements from Kerrith Whyte and Marcus Clark are vital to making the Owls’ rushing game deadly once again.

DeVivo: Anyone who followed FAU football last year knew about the offensive line struggles. The depleted offensive line received a boost this spring with the return of Reggie Bain from the broken hip he suffered in a motor scooter accident. While FAU was still without Tarrick Thomas, Jack Breshears Bryan Beck and Richard Williams for spring practices, the Owls managed to emerge from spring without any more significant injuries.

FOUR DOWN TERRITORY:
Spring Game
What was the biggest surprise at FAU this spring? Who was the spring MVP? Those questions and more answered here.
was last modified: April 23rd, 2017 by FauOwlAccess
0 comment
1
Facebook Twitter Google + Pinterest 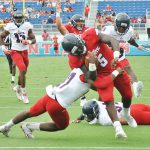 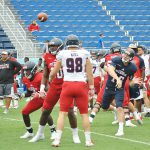