BOCA RATON – Lane Kiffin hoped for a little shock and awe from his FAU Owls during the first spring game of his tenure.

What he received was more shock and ahh-shucks.

FAU’s new offense didn’t look much different than the old one that delivered three consecutive 3-9 seasons and cost his predecessor, Charlie Partridge, his job.

If punting were a part of the spring game, Ryan Rickel would have been worn out.

“The offense hurt themselves with some costly penalties,” Kiffin said. “They put themselves in some bad situations, some third and shorts and knocked them out. Then that pick play down in the end zone hurt them. I thought Driskel played really well. He did some things. De’Andre’s day was a little more up and down, which was a little disappointing because he has had a really good week or week and a half here. We will go back and look at the film. I am not going to make any big statements because you learn film is never as good as it seems or as bad as it seems. I am sure we will go back and think differently once we watch film on some certain subjects.”

An FAU defense missing four players who could start once the season arrives tackled significantly better than it did at any point last season, intercepted three passes and effectively shutdown Kendal Briles’ Baylor offense – at least a limited version of it – in what was determined to be a 62-33 defensive victory.

“I thought the defense played really well,” Kiffin said. “Obviously, the first half was live, game-like, and I am proud of our defense. I want to say that after the first week we were here and the first week of spring practice it was a major concern. I’m not saying we’re there yet, but I am proud of our coaches and our players because the defense was much better these last couple Saturdays than they were the first couple practices of the spring.”

Driskel, the incumbent starter, led the Owls on all four of their touchdown drives, throwing three TD passes. Johnson couldn’t lead the Owls to points, was a three-and-out machine, and threw an interception.

“It seemed like he looked at the rush a little bit, from my view point,” Kiffin said of Johnson. “There were some times where he took some sacks where he really should have thrown the ball away.”

Henry Bussey caught two of Driskel’s TD tosses – one coming on the final play of the game. Kamrin Solomon caught the other. None of Driskel’s TD passes covered more than eight yards.

Devin Singletary rushed for 52 yards on seven carries and scored the first TD of the afternoon.

“I think as an offense we played OK,” Driskel said. “There’s a lot of stuff we can get better at, though.”

Offensive MVP: Senior wide receiver Henry Bussey scored two touchdowns and set up another with a nice catch over the middle. He caught four passes for 60 yards on the afternoon. Bussey came on strong late in the spring. Teamed with Kamrin Solomon in the slot, he could finally become a weapon when the Owls go to four-wide receiver sets. He gets the nod ever so slightly over Jason Driskel.

Defensive MVP: In his final spring game, Haiden Nagel recorded a sack and a half. With an impact player needed on the defensive line – a position that Kiffin has openly called the most concerning unit – Nagel showed why he figures to be the leader for that group in 2017.

Key Absences: Daniel Parr remained out at quarterback. He missed all of spring following foot surgery. … Khantrell Burden and Azeez Al-Shaair will return in August to play linebacker. Kris Harris had been serving as the Owls’ starting middle linebacker, but he missed the last two practices with an undisclosed injury. …The offensive line will be bolstered by the returns of Tarrick Thomas, Bryan Beck, Jack Breshears, and Richard Williams. …Safety Jalen Young didn’t play because of a separated shoulder suffered last week. …Defensive end Hunter Snyder missed all of spring with an undisclosed injury. …Defensive tackle Ray Ellis, a two-year starter, is on track to return in the fall from the ACL surgery that forced him to miss the spring. 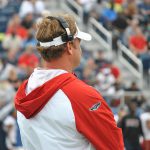 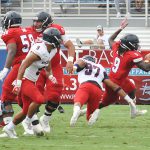