BOCA RATON – FAU won one of four quarters on Saturday. That was enough.

Nick Tronti ignited what had been a sluggish Owls’ offense with a 49-yard touchdown run on FAU’s first possession of the second half, then followed that score with TD passes of 25 and 16 yards to propel Florida Atlantic to a 21-17 victory over Charlotte.

Willie Taggart became only the second FAU coach to win in his debut, and his version of the Owls performed far more impressively than Carl Pelini’s unit that squeaked past Wagner 7-3 in 2012.

“When you can be down 10 points and nothing’s going your way in the first half, to come back and play the way they did and win the ballgame, I’m really impressed with our guys,” Taggart said.

Following each week’s game we’ll break down the good, the bad and the peculiar from the previous day’s game in our Four Down Territory analysis.

Game MVP: Leighton McCarthy. Make a case for quarterback Nick Tronti if you’d like – the Owls’ QB came through when his team needed him – but McCarthy is most responsible for this victory. Not only did he become the eighth player in FAU history to record three sacks in a game, his sacks directly affected the outcome. McCarthy’s first sack forced Charlotte to settle for a field goal on its first possession. Charlotte followed his second sack with a missed second-quarter field goal attempt. McCarthy’s final sack induced a fumble, the recovery of which led directly to FAU’s final score. McCarthy recorded a career-high 10 tackles on the evening. He’s currently fifth among FAU career sack leaders with 14. McCarthy’s next full sack will move him past Hunter Snyder into  fourth. Another three-sack performance and he’ll be alone in second behind only Trey Hendrickson. McCarthy won’t catch Hendrickson, but he’s primed for a big year. FAU’s rebuilt offense line received consideration here.

Biggest Surprise: FAU’s disciplined play. Season openers tend to be plagued with penalties and other mistakes. That’s especially true of teams playing for new coaches who installed different systems. Critics of Willie Taggart’s tenure at Florida St., and to some extent at Oregon, pointed to excessive penalties as a sign of his unfitness for the job. Well, on Saturday the Owls committed only three penalties costing them 19 yards. FAU didn’t turn the ball over. The Owls didn’t allow a sack. It’s a performance that bodes well for the future.

Controversial Call: Sticking with Tronti. With FAU’s offense looking so anemic in the first half it wouldn’t have been surprising to see Taggart make a change at the position coming out of the locker room. Taggart could have turned to Javion Posey, who Tronti edged in a fall camp quarterback battle. (Sources tell OwlAccess.com that Justin Agner was unavailable for Saturday’s game because of COVID-19 concerns). Instead, Taggart altered his play calling, going off script to call plays he believed Tronti would be more comfortable running. Taggart made the right call. Tronti responded with three third-quarter touchdowns and the Owls are 1-0. For those lamenting the decision to go for the first down on fourth-and-1 late in the fourth quarter rather than kicking a field goal, all this faith in a career 63-percent field goal kicker is perplexing. Combine Vladi Rivas’ propensity for missing relatively simple kicks with the monsoon conditions at the time and the decision to not to kick is easily defensible. Far more egregious was Charlotte coach Will Healy’s decision not to attempt a two-point conversion following the 49ers fourth-quarter TD. Had Charlotte converted a two-point try, the 49ers were well within range to attempt what would have been a game-tying field goal as time expired.

Extra Point: FAU’s season-opening victory does set the Owls up for a run at repeating as Conference USA champions, but the Owls do have several holes to fill. To begin with, FAU’s downfield passing game was nearly non-existent. Tronti lacked both crispness and accuracy on long passes, and those issues may be tough to fix. FAU’s secondary also surrendered too many big plays, most notably on Charlotte’s final drive when Smoke Mungrin got burned for a 48-yard gainer that put Charlotte in position to win. The return of Jordan Helm, who sources tell OwlAccess.com missed Saturday’s game because of COVID-19 concerns, should help. The good news for FAU is C-USA is once again weak. Next week’s opponent, Southern Miss, has already made a change at coach and won its first game of the season on Saturday over downtrodden North Texas. An Oct. 24 tussle at Marshall should reveal how good these Owls are.

Four Down Territory: FAU 21 Charlotte 17
Analysis: McCarthy's strong start, Tronti's second-half rebound and a look at what this victory means for FAU in our first Fourth Down Territory analysis of the season.
was last modified: October 4th, 2020 by Chuck King
0 comment
0
Facebook Twitter Google + Pinterest 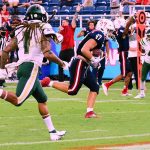 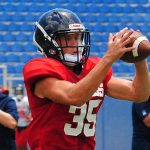