QB Quest
A quarterback formerly committed to a Big 10 school is among the official visitors to FAU this weekend.

BOCA RATON – FAU is bringing a player who may be its quarterback of the future to campus this weekend for an official visit.

Roswell (Georgia) dual threat QB Cordel Littlejohn is eager to see what the Owls’ Boca Raton campus has to offer.

“I can not wait,” Littlejohn said. “I’ve been thinking about it all week.”

A 6-foot-4, 190-pound former Illinois commit, Littlejohn would be the first quarterback to commit to FAU in 2018. The Owls are only expected to sign one signal caller.

“He told me that I reminded him a little bit of Jalen,” Littlejohn said. “He said he could see me running and throwing the ball a lot, like Jalen Hurts.”

Not too long ago quarterback didn’t appear to be a position of need for the Owls. Then Daniel Parr, FAU’s starter for the season’s first three games, elected to transfer. A couple weeks later Jason Driskel, starter of the final 11 games, announced he would forego his final year of eligibility to graduate in May with an engineering degree.

Littlejohn does not have any other official visits scheduled, although he says New Mexico recently offered.

Joining Littlejohn for this weekend’s visit is a player quite familiar to Kiffin.

Hutchinson CC running back B.J. Emmons is expected to make the trip to see his former offensive coordinator.

Kiffin and Emmons were together for one season at Alabama before Kiffin left to become FAU’s head coach and Emmons transferred to Hutchinson.

Emmons averaged 4.6 yards per carry and scored 10 touchdowns in 12 games for Hutchinson. He also fumbled the ball seven times, losing four of them.

The year prior Emmons averaged 4.9 yards on 35 carries for the Crimson Tide before a foot injury ended his season.

College of the Canyons offensive lineman Carlton Lorenz is also expected to be part of the group converging on South Florida. The Owls lost three starting seniors, two of which were All-Conference USA performers, off least season’s offensive line.

FAU currently has 13 high school or junior college players committed to its 2018 football recruiting class, five of whom signed in December.

More news about official visitors will be added as it becomes available. 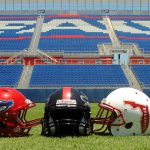