Dusty May is assured of leading FAU to a winning season in his first year at the helm after FAU defeated North Texas 60-54 in Denton, Tex., on Thursday.

For the second time in two weeks FAU used a stifling defense to shut down the Mean Green, holding them to 32.3 percent shooting on the night and forcing 16 turnovers.

“It was an incredible physical performance by our guys,” May said. “Everybody that played contributed and battled at a high level. It was as physical a game as we’ve been in all year and our guys responded to the physicality.”

FAU’s 17 victories are the most by a first-year Owls coach since the program moved to Division I.

Aleksandar Zecevic’s jumper from inside the free throw line to pushed FAU’s lead to 50-34 with 6:46 on the clock, but the Owls needed to withstand a furious run by North Texas in the closing minutes, getting within four points. Two Xavian Stapleton free throws ultimately sealed the victory.

FAU scored seven of the game’s first eight points before the Mean Green reeled off 11 in a row as part of a 16-2 run to take a 17-9 lead. Madiaw Niang hit a three-pointer that began a 16-3 Owls rally to regain a 25-20 advantage with four minutes to go in the first half. The cushion remained five at the break, 28-23.

The victory was the Owls first in Denton since Feb. 3, 2011 and only their second ever.

Falling Backward: Guards Anthony Adger and Michael Forrest combined to miss all seven of their shot attempts in 55 minutes of play. Adger committed five turnovers but did lead FAU with five assists.

Key Stat: 1 – Field goal for North Texas in the final 10 minutes of the first half.

Up Next: The Owls return home to host Louisiana Tech on Wednesday. Tip-off is set for 7 p.m. and it will be Senior Night. 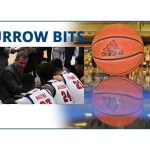 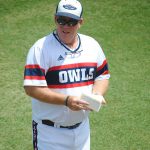