Trophy Race
Reward for winnng the Shula Bowl? The race to claim the trophy. FAU players are looking forward to winning that race later today.

The bigger guys, like defensive tackle Ray Ellis for example, hope to rely on cunning.

Anything goes in the race to be the first to hoist the Shula Bowl Trophy.

“I’m going to have to pull a scheme on how to get there faster,” Ellis said. “If the fast guys get there, I’m out of luck.”

FAU (6-3, 4-1) and FIU (5-4, 3-3) kickoff Shula Bowl XVII on Howard Schnellenberger Field today at 6 p.m. Along with bragging rights, the victory in the NCAA’s southern-most rivalry claims the Shula Bowl Trophy for the following year.

Traditionally, players want that year to start as early as possible. As the final seconds tip away, the winning sideline cheats toward the table displaying the trophy, usually located beyond the corner of one end zone.

“In (2017) I was one of the top three that made it to the trophy,” wide receiver Pico Harrison said. “Last year I couldn’t make it. It’s really fun running toward that trophy, racing all the guys, and seeing everybody happy and all that. It’s really fun.”

Twelve times in the first 16 meetings FAU players made that sprint, including the last two meetings between the schools.

“I remember Herb Miller and those guys all sprinting down for the trophy,” Kiffin said. “I don’t think I even knew there was a trophy. I think that kind of put it in perspective for me how big (the game) is.”

The Shula Bowl Trophy features a plastic replica of each team’s helmet on opposing sides. Recent tradition has the winning team ripping the loser’s helmet off the wooden trophy. Schools have to re-attach said helmet, however loosely, at a later date.

Perhaps an affront to civility, such school-spirit inspired jubilant vandalism isn’t a major concern for Kiffin.

“We’ve got a lot bigger problems than that,” Kiffin said. “If we’re in a position to decide whether to rip it off, that’s probably a good spot to be in.”

Arguably knocked off accidentally the first time it happened, tearing the loser’s helmet off the trophy has grown into a cherished tradition.

“It’s always cool to see that other helmet get ripped of the trophy,” Ellis said.

Thus, all the planning to get to that trophy – although some veterans are more than willing to let others be first.

“Last year I didn’t even attempt to because usually it’s like, Willie’s the first one,” senior tight end Harrison Bryant said. “He’s thinking about it and he’s fast as crap. I’ll probably just sit back and watch him run and enjoy it.” 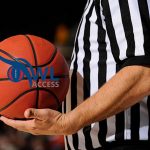 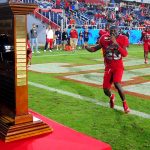