BOCA RATON – FAU honored its seniors prior to the kickoff of Saturday’s game against Old Dominion, the final home game of the 2016 season for FAU.

FAU came out strong, scoring in its first two possessions, and the Owls took a 21-13 lead into halftime. However, a problem that’s plagued the Owls frequently this season once again reared its head.

The Owls’ offense couldn’t accomplish much and their defense struggled to stop anyone. Old Dominion raced past FAU for a 42-24 victory.

Here’s a photo gallery from the game. It includes the pregame warm-ups and the ceremony honoring the seniors. There is also plenty of game action, as well as shots of fans enjoying the game.

These shots were taken by Bongo. Enjoy. 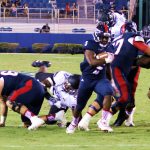 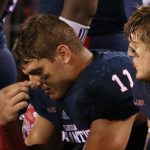