BOCA RATON – FAU couldn’t overcome a 13-1 late La. Tech run, falling to he Bulldogs 72-69 in the Owls final home game of the season.

A Xavian Stapleton three pointer pulled the Owls to within four, 69-65 with 24 seconds left. La Tech made two free throws, before Karlis Silins answered with a thunderous dunk.

Stapleton stole the inbound pass and made two more free throws, trimming the FAU deficit to 71-69 with 7.4 seconds left.

La. Tech only made one of two free throws on the ensuing trip, giving FAU the opportunity to tie the game with a last-second three-pointer, but the Owls never got a shot off.

“At some point, we have to come out and throw the first punch and be the aggressor from the tip, Louisiana Tech did that tonight,” FAU coach Dusty May said.

Moving Forward: Anthony Adger scored 17 points and nabbed five boards. He also made two three-pointers, giving him 85 for the season, tied with Greg Gantt for the third highest single season total in FAU history. …Xavian Stapleton tallied 16 points and seven rebounds. …The Owls outrebounded La Tech 35-26. FAU has 1,201 rebounds this season, a school record. … FAU hit seven triples as a team, extending its school record to 266 on the year

Up Next: FAU concludes the regular season with a trip to Marshall. Tip-off on Saturday is scheduled for noon. 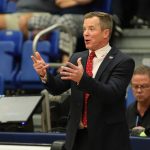