“Eventually you’ve got to hit a point – I don’t know when that is – where you say, OK, we’ve tried both. Let’s look at their full body of work and make a decision,” Kiffin said. “Even though it’s really close, we’ve just got to do it.”

The passing game didn’t look all that different with Driskel throwing the ball than it did with Parr behind center.

Driskel completed 17 of 29 pass attempts for 150 yards against the Bulls but struggled on downfield pass attempts and completed only one third down pass that produced enough yardage to move the chains.

“He missed some big plays, he’ll be the first to tell you,” Kiffin said. “You miss plays sometimes, and you miss a slant, we all do that, that’s a 10-yard gain. We missed touchdown plays.”

Missing open receivers were an obvious concern for Kiffin, but he did like the manner in which Driskel managed the game, getting the Owls into the proper play based on what the defense showed.

In what has become a season-long narrative, though, the Owls couldn’t make the right calls or plays on crucial downs.

With Driskel behind center, FAU only converted three of 10 third down opportunities. Only one of those conversions came via a completed pass, and that play required an extraordinary effort from tight end Harrison Bryant, who fought through would-be tacklers to gain the yardage necessary to extend the drive.

For the season the Owls are only converting 27 percent of their third down opportunities, which ranks No. 124 out of 129 teams nationally.

Even with both Driskel and Parr struggling, Kiffin isn’t expecting to add any more candidates to the battle.

Auburn transfer John Franklin, a former quarterback, is establised at wide receiver now and aside from a couple of change-of-pace snaps during any given game – Franklin has taken one snap in each of the last two games, running the ball both times – at receiver he will stay.

Scout team quarterback Conor Miller, a redshirt junior walk-on from Mount San Antonio College who joined the Owls prior to fall camp, is not part of the competition, Kiffin said.

Former East Mississippi CC and “Last Chance U” star De’Andre Johnson is still recovering from surgery to remove blood clots from his arm. His return this season appears to be unlikely.

“It’s just those two, really,” Kiffin said, referring to Driskel and Parr. “Obviously it’s unfortunate about (Johnson) being out. I think everybody thought he was going to be the guy who could add this other element – a similar element to what we had with Jalen Hurts at Alabama.” 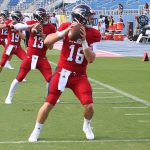 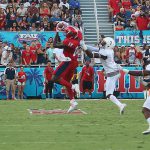