Pick Per Day
FAU CB Shelton Lewis hopes to notch an interception each day of camp. So far, he's doing exactly that.

“Once I started having them I told (Raekwon Williams) that I want to have a pick a day now, so I’m trying to get one every day,” said Lewis, a junior who has yet to notch his first pick during the regular season.

It took a while on Saturday, FAU’s first practice of 2017 fall camp in shoulder pads, but Lewis nabbed his third interceptions in as many days, this one coming during the team scrimmage segment in the closing minutes of practice on a pass that floated out of the hand of Jason Driskel.

“I’m actually so happy because now it’s two great corners on both sides of the ball so therefore if they throw at Shelton and he knocks it down they are going to come to my side,” Williams said. “It gives me opportunities to make plays on the ball, too.”

“That first five that go out there, I think they look like a real unit,” Kiffin said.

Making plays: Dustin Bowens remains the third-string tight end, but he’s showing a pass catching ability that’s been missing from his game in previous years. …Throw a ball Nate Terry’s way and he comes down with it. Terry and Pico Harrison look to be the biggest beneficiaries from the loss of Kalib Woods and Kamrin Solomon. …Cornerback Chris Tooley recorded a Pick 6. Ocie Rose also nabbed a pick on a misguided Johnson pass. …Zyon Gilbert batted down a De’Andre Johnson pass intended for John Raine.

Tracking the Depth Chart: One day after praising Johnson’s work as the first team quarterback, Kiffin said the JUCO transfer, “Made some poor, forced throws, which I don’t think he’d done the first two days.” …The new wide receivers are likely to climb the depth chart quickly, but on Saturday Bobby Mitchell and Pico Harrison served as the starting wideouts. …Freshman cornerback Ahman Ross will miss the season because of a knee injury that requires surgery. Kiffin called Ross “one of our better signings,” and said the injury likely happened between signing day and Ross’ arrival at FAU.

Newcomer Watch: Wide receiver DeAndre McNeal cleared his academic hurdles and practiced for the first time with the Owls. “It was really good to have him out there,” Kiffin said. “This is a premier kid.” …Fellow wide receiver D’Anfernee McGriff continues to impress with his hands. Passes seem to stick to them, and once he has his mitts on the ball, defensive backs aren’t strong enough to knock it out. …Freshman wide receiver Denzel Houston made the catch of the day – a leaping one-hander in the end zone. 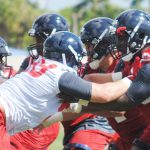 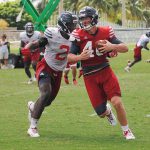