Maybe Too Exciting?
FAU coach Lane Kiffin didn't like the way the Owls wore down in the first practice of fall camp.

BOCA RATON – Lane Kiffin expected more out of his Owls on FAU’s first day of practice.

The first-year FAU coach felt his players let the excitement of Thursday’s first practice of the fall get to them early, prematurely expending energy that led to sloppy play toward the end of practice.

“I was a little disappointed that way,” Kiffin said. “I thought we expected that in the spring but after the summer conditioning program I thought the would be better.”

Kiffin voiced his displeasure at the end of practice, addressing the Owls in a manner louder than he employed all of spring.

“We saw a lot of guys wear down and not practice very well toward the end of practice,” Kiffin said. “Obviously we have a lot of work to do with our guys.”

While those comments would seem to indicate some displeasure with the strength and conditioning program, Kiffin didn’t place the blame there.

“Coach Love has done an awesome job in the offseason,” Kiffin said. “I went in the team room and had the team meeting and they look completely different to me than when we had that team meeting in December.”

Of course one of the reasons they looked different is because many of them were completely different people. The camp-opening roster issued by FAU featured more than 30 names which weren’t there for spring football.

“You have to really think like spring didn’t really exist because you have so many new players that were not here – whether that’s guys coming in or guys that were injured that are now playing,” Kiffin said. “Really, we treated it like we hadn’t done anything before, the way we approached meetings, our mindset – explaining everything to guys, challenging every guy.”

Wide receivers Kalib Woods and Kamrin Solomon, standouts during the spring, were not listed on the roster.

Police arrested Woods, last year’s leader in receptions and receiving yards, last month, charging him with two counts of felony battery for his alleged role in an off-campus fight. OwlAccess.com broke the news on Wednesday that FAU had also issued a No Trespass order to Solomon for his alleged role in the same incident. Video of the fight appears to show Solomon as being the second shirtless combatant in a fight that landed two fellow FAU students in the hospital.

“I’m not getting into that today. I’m here to talk about the players that were here today,” Kiffin said, before adding, “There’s a bunch of different situations, some we can talk about, some we can’t.”

Kiffin quickly denied speculation that he might be a candidate to replace the recently-resigned Hugh Freeze at Ole Miss.

“There’s nothing to that,” Kiffin said.

Making Plays: Cornerback Shelton Lewis made a leaping interception in front of John Mitchell – easily one of the best plays of the morning. …Devin Singletary had his Motor running early. Singletary made a couple players miss in the open field on a play that went for big yardage. Players only needed to tag Singletary to end the play and they couldn’t manage to do that. …Defensive end Leighton McCarthy made an exceptionally athletic play, cutting short his pass rush and taking to the air to bat down a DeAndre Johnson pass.

Tracking the Depth Chart: Quarterback Jason Driskel worked the first team on Thursday. Kiffin said DeAndre Johnson will be with the starters on Friday. “Instead of doing every period and switching them I thought it would be better to give them full practices,” he said. …Kiffin and the staff also garnered their first true look at quarterback Daniel Parr, who missed all of spring while recovering from foot surgery. “I can see why he was a pretty highly touted recruit,” Kiffin said. …Most of the JUCO transfers who were on the field began camp working with the second or third string, with the exception of William Tuihalamaka. The former San Diego St. Aztec started at both guard and tackle on Thursday, flipping spots with Brandon Walton. Reggie Bain was the starting left tackle, with Roman Fernandez at left guard and Antonyo Woods at center.

Newcomer Watch: Wide receiver D’Anfernee McGriff will probably shed a few pounds during camp but even at 6-1 and about 240 pounds he still had the speed to get open downfield for some scores. …At 5-8, 155 pounds, fellow wide receiver Willie Wright won’t be confused with McGriff, but the Jacksonville-Raines product drew praise. “Willie Wright made some good plays today which was good to see – quick player, slot-type guy,” Kiffin said. …JUCO transfer DeAndre McNeal is in Boca Raton but was not on the field on Thursday.

By the Numbers: In the spring Solomon and kicker Landon Scheer wore No. 15. Neither of them were on the roster to open camp. Conor Miller, a JUCO QB by way of California, now wears 15.

Instant Message: “We’re trying to build a team where our leaders take over the team because that’s when you get really good. If the coaches have to do it all the time you are not going to be that good.” – Lane Kiffin 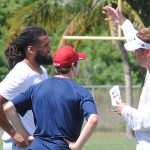 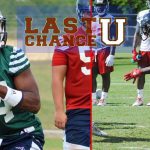