Enough Answers?
FAU needed to answer five questions on the offensive side of the ball during fall camp. How'd the Owls do? The answers are mixed.

FAU WR John Mitchell gives a thumbs up during fall camp. His receivers unit remains one of the Owls biggest questions entering the season. (OwlAccess.com photo)

BOCA RATON – Prior to the start of camp we posed five questions that FAU would need to answer in the coming weeks on each side of the ball, beginning with the offense.

With the Owls now less than a week away from Saturday’s Aug. 31 opener at Ohio St., now seems like a good idea to revisit those questions and examine the potential answers.

Late last week Lane Kiffin didn’t sound like a coach who found the answers he craved during camp.

“A lot of questions,” Kiffin said. “A lot of production lost last year, offensively, and we still have a question at quarterback.”

Below are the questions we thought needed answers, along with the our post-camp analysis of those answers.

1. Who will play QB?
We may have the answer to this question later today. Or it may not come until Saturday. Or for a few more weeks. Remember, Jason Driskel didn’t become the starter in 2017 until Week 4. The three-man battle between incumbent Chris Robison, Indiana transfer Nick Tronti and former Kent St. signal caller Justin Agner effectively trimmed to two when Agner missed the past two weeks with an illness. Based on performances in the scrimmages, the battle between Robison and Tronti didn’t appear to be all that close. Is a concern over Robison’s off-the-field maturity keeping Kiffin from announcing his decision? Will the Owls play both Robison and Tronti early against Ohio St? We’ll soon know the answer – but Kiffin wanted to know the answer long before now.

2. Will Calvin Ashley be eligible?
Yes he is – for Florida A&M. The Auburn transfer never took the practice field for FAU, electing to transfer again after missing the first week of fall camp because of an illness. That left a hole at right tackle, creating a battle that’s yet to be resolved. Doug Johnson and Maurice Robinson, both redshirt freshmen, will play against Ohio St. Kiffin hopes to a true starter will emerge by the time the Owls open Conference USA play.

3. Who’s going to catch the passes?
Somehow the answer to this question is even less clear that it seemed a month ago. Starters John Mitchell and Pico Harrison still have injury concerns. Transfers DeAngelo Antoine and Rasaan Lewis are working out well for the Owls. The loss of true freshman Eyin Cole for the season to an ACL injury is a big blow, and no other freshman wide receiver appears ready to contribute immediately. Kiffin is so desperate for a playmaker at wide out that he’s moved super athletic true freshman quarterback Javion Posey to wide receiver. Posey’s looked the part so far, so maybe that will help. But if the Owls have to face Ohio St. and UCF without Mitchell and Harrison? That’s not a winning formula.

4. Who will replace Devin Singletary and Kerrith Whyte?
The answer to this one is the more positive version of the answer to the wide receivers question. There is no single replacement for Singletary – and there was never a plan to have one guy carry the load. Fall camp served to solidify the running back unit as the Owls’ deepest on offense. James Charles continues to do a little bit of everything well. B.J. Emmons is a master at the goal line and grows stronger as games progress. If true freshman Larry McCammon gets enough carries – and the Owls would be happy to ensure this – he’ll make a push for Conference USA’s All-Freshman team. Malcom Davidson owns game-breaking speed. Tyrek Tisdale has all the tools. All this potentially gives Owls the luxury of redshirting Kelvin Dean, likely a member of the two-deep on most other C-USA teams. More good news for FAU – each of these backs are threats to catch the ball out of the backfield. By spreading the ball around, FAU may lead C-USA in rushing without having a runner rank in the Top 10 individually.

5. Will Lane Kiffin make any key roster additions?
The short answer is, “No.” It’s also the long answer. The biggest addition offensively is actually the move of Posey from QB to WR. It’s probably a positive that Kiffin didn’t feel the need to bring another quarterback on board, like he did last season with Rafe Peavey. But the Owls will head to Columbus later this week with essentially same set of personnel that first took the practice field in early August.

Enough Answers?
FAU needed to answer five questions on the offensive side of the ball during fall camp. How'd the Owls do? The answers are mixed.
was last modified: August 25th, 2019 by Chuck King
0 comment
1
Facebook Twitter Google + Pinterest 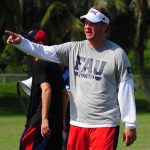 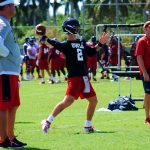