BOCA RATON – As we continue to countdown the Top 25 FAU Games Ever Played with Nos. 20-16, Men’s basketball makes its first two appearances.

No. 20: FAU Basketball 83, Oklahoma St. 81 (Dec. 2, 1998) – Coming off a 5-22 season the year prior, FAU hauled its 1-3 record Gallagher-Iba Arena. Oklahoma St. won its first four games that year, and had won 80 consecutive non-conference home games, a streak dating back nearly 12 years. At the time the No. 11 Cowboys held an RPI of 23. FAU’s RPI of 307 was better than only three teams nationally. Yet the game was tied in the closing seconds when Rino Bevis, while lying on the ground, stripped Cowboy’s guard Joe Adkins of the ball. Damon Arnette ultimately wound up with the ball, hitting a two-foot bank shot with 1.1 seconds remaining to win it for the Owls. “”I don’t think they could beat us more than once if we played 30 times,” OSU coach Eddie Sutton told The Oklahoman afterward. “But they did tonight when they played us.”

No. 19: FAU Basketball 80, FIU 78 (OT, Feb. 19, 2011) – Pursing its first Sun Belt title, FAU traveled to Miami for a must-win game against rival FIU. The Owls trailed by nine early in the second half, but two late threes from Ray Taylor brought FAU back. With the game tied in the closing seconds, a Jordan McCoy steal prevented FIU from launching a potential game-winning shot, sending the game to overtime. The Owls once again fell behind in the extra stanza, but Greg Gantt’s three-pointer and a couple of McCoy free throws had the Owls leading by one. FIU had it’s chance to win but Brett Royster blocked DeJaun Wright’s layup with 5 seconds remaining. Taylor made one-of-two free throws to put the Owls up 80-78, then knocked FIU’s inbound pass into Greg Gantt’s arms for the win. The victory gave the Owls the Sun Belt’s East Division title. A few days later they beat Troy to claim their lone Sun Belt regular season title.

No. 18: FAU Football 31, Bethune-Cookman 28 (Sept. 8, 2001) – In only the second game in program history, FAU traveled to Daytona Beach to defeat No. 22 Bethune-Cookman in a driving rainstorm. Trailing 28-24 midway through the fourth, quarterback Jared Allen connected with Larry Taylor for a 70-yard touchdown. The Wildcats marched back down the field but FAU’s Todd Poitier recovered a fumble near the goal line. B-CC had one more opportunity to tie the game but their 48-yard field goal fell short. FAU recovered four fumbles, with Taurian Osborne returning one 100 yards for a score, and didn’t commit a turnover. The Owls were eventually going to get their first win, but defeating a ranked FCS opponent two games into their first year validated the Owls’ decision to launch the program.

No. 17: FAU Football 38, Troy 32 (Dec. 1, 2007) – FAU headed to Sun Belt Conference power Troy, undefeated in conference play, for an end-of-the-year showdown that would determine the conference champion. Trailing 9-7 at half, FAU exploded for 21 third quarter points and added another touchdown on the first play of the fourth quarter. Two Kris Bartels fumble recoveries set up two of those scores. Troy, however, scored three fourth quarter touchdowns and drove inside the FAU 35 before the Owls finally halted the Trojans final drive. Rusty Smith threw for 291 yards and two touchdowns. Charles Pierre, DiIvory Edgecomb and Willie Rose all rushed for scores. FAU became the youngest program ever to move to the FBS level and win a conference title, earning a date with Memphis in the New Orleans Bowl.

No. 16: Colgate 36, FAU 24 (Dec. 13, 2003) – FAU needed only three seasons to reach the Division I-AA (now FCS) semifinal game. One week prior the Owls defeated Northern Arizona 48-25, giving FAU a nationally televised game at Lockhart Stadium – and there’s a case to be made that the victory over Northern Arizona belongs in this spot, not the loss. But hosting Colgate brought the kind of national attention to FAU that the program hadn’t yet experienced. Colgate outclassed FAU that afternoon. FAU trailed 23-7 at the half and twice drew within a couple of touchdowns in the second half, but Jared Allen had an off day. Two of the three interceptions he threw on the day came in the second half, thwarting comeback efforts. Doug Parker rushed for 47 yards and a touchdown. He also caught a touchdown pass. The Owls didn’t win this one, but simply playing on a national stage so early in the program’s history was memorable. It also proved to be FAU’s final game before transitioning to Division I.

Best Games Ever (20-16)
A couple of basketball games and three football games comprise these spots in our countdown of the top 25 FAU Games Ever Played.
was last modified: June 25th, 2019 by Chuck King
0 comment
0
Facebook Twitter Google + Pinterest 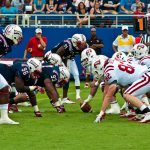 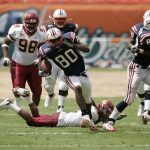