Sack Exchange
The FAU defense recorded the first four sacks of its season in Saturday's victory over Bethune-Cookman. Here's video of all four.

BOCA RATON – FAU’s dominating defensive performance in the 45-0 victory over Bethune-Cookman produced the Owls first four sacks of the season.

Sophomore defensive tackle Will Davis notched the first sack of the season, dropping quarterback Larry Brihm for a 10 yard loss midway through the second quarter. For Davis, the sack was the second of his career.

“This is what I expected to do, especially after what I was able to do in JUCO,” Bagner said. “I felt like my time finally came, so I took the opportunity.”

Defensive tackle Kevin McCrary and nickel back Quran Hafiz teamed up for the third sack of the game.

Defensive end Nick Internicola was credited with a solo sack on the fourth one. Video shows that Davis played a role in that one, too, so he may have a half-sack added to his total.

None of the six players credited with the sacks are starters.

“We’ve been down before so we couldn’t rotate everybody,” Bagner said. “But being up, everybody got a chance. I don’t think there was anybody on the D-line that didn’t get in so we were able to see where everybody stands in the rotation. Hopefully, coaches can now take that film and put the players in more since they see what we could do.” 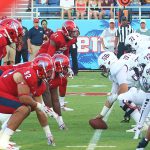 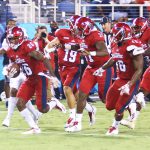