Quite the Rush
FAU punter Ryan Rickel delivered the most surprising rushing play in Saturday's victory over WKU - and the Owls' running backs took notice.

BOCA RATON – Devin Singletary stops and starts, dashes left before cutting right, leaving a trail of would-be tacklers wondering how they missed him.

Buddy Howell can throw some elusive moves at defenders, but he’s more likely to drop the hammer and power through – if not over – tacklers.

“He runs like a little chicken – legs be kicking so fast,” a laughing Howell said, complimenting Rickel’s fowl-like running style – somewhat – as opposed to questioning his courage.

College football fans gained their first true exposure to FAU punter’s burst during the Owls’ 42-28 victory over Western Kentucky on Saturday. Facing a fourth-and-11 at the WKU 42 as the clock ticked beyond the fourth quarter’s midpoint, Lane Kiffin called for a fake punt.

Rickel – well, dashed may not be the right word – motored right before turning up-field for a 22-yard gain that gave the Owls a first down and led to Singletary’s game-clinching touchdown. To see the play, click on the video at the top of the page.

“Definitely nice to contribute to the team that way – with not only my leg,” Rickel said.

“I was like, Ohhhh what happened?” Howell said. “The crowd is cheering. Oh man! Rickel!”

Like most of his teammates, Howell needed to see a replay of Rickel’s run to appreciate what the player he refers to as “Rick” accomplished.

“Rick did his thing,” Howell said. “Rick was out there running fast. I love to see Rickel running. Rickel runs funny but Rickel got the first down. It caught me off guard. It caught the whole offense off guard because we didn’t know they were fixing to call it.”

How fast was Rickel running? Howell smiled when suggesting that Rickel boasts 4.6, even 4.5 speed in the 40-yard dash.

Singletary didn’t venture a guess, and wouldn’t even assert that he, the Conference USA Offensive Player of the Week, runs faster than the Owls’ punter.

“That’s a good question,” Singletary said. “I guess we are going to have to race.”

For the record, Rickel doesn’t know his speed. A redshirt senior, Rickel says he doesn’t think he’s been timed in the 40 since high school – if it even happened then.

The fake punt was only the start of what’s been a pretty good set of days for Rickel, who on Monday was named to the watch list for the Ray Guy Award, presented annually to the nation’s best punter.

Primarily a pooch punting specialist a few years ago, Rickel averages 42.6 yards per punt in his first season as the Owls’ primary punter. The Owls downed nine of his 34 punts inside their opponents’ 20. Nine have also traveled more than 50 yards.

After Saturday, though, all most people wanted to talk about was the successful fake.

“I don’t know if it makes me feel more important to the team because I feel like I already am – just how crucial punting is and field position,” Rickel said. “But it definitely felt nice to be able to do that.” 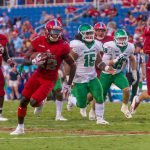 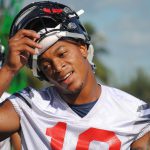