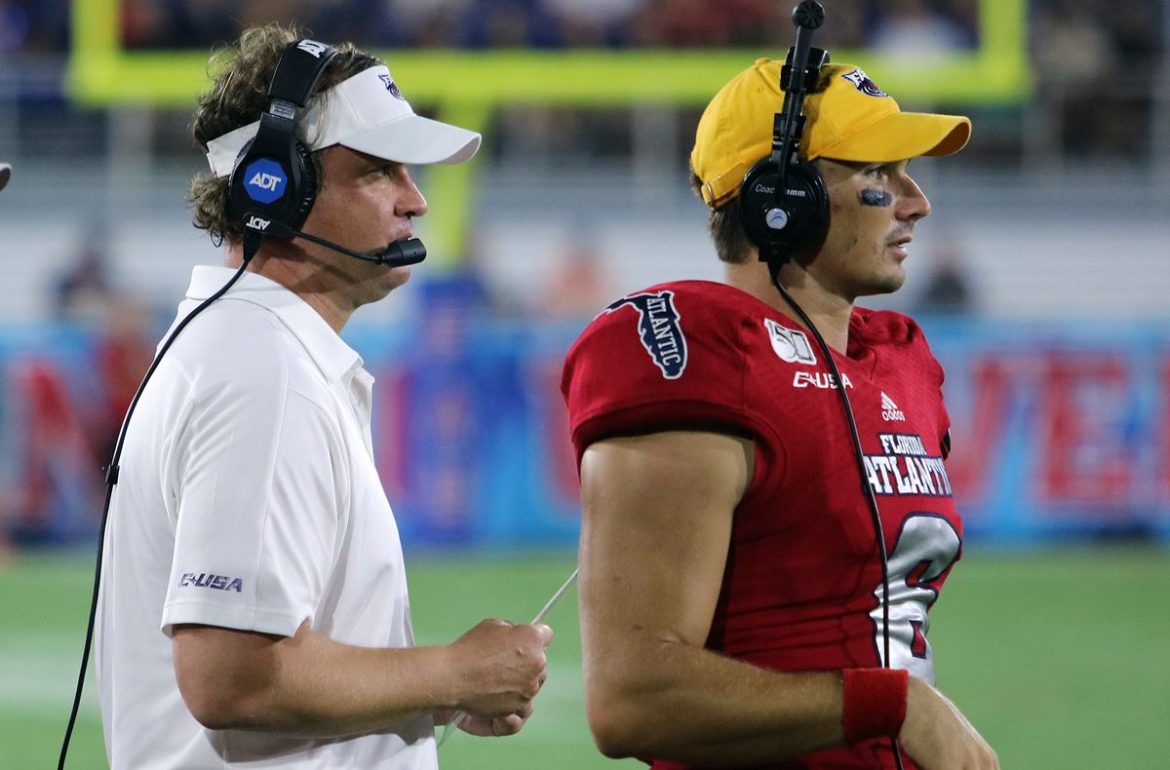 FAU coach Lane Kiffin and the Owls will be trying to halt a four-game FAU losing streak when Florida Atlantic travels to Ball St. on Saturday. (Photo by Bongo)

The numbers, however, make that exercise difficult.

Statistics can lie. In this case they don’t.

In their two losses to open the season the Owls’ offense appeared feeble, their defense porous.

FAU averages fewer than 80 rushing yards per game, ranking in the bottom 10 of the FBS. The Owls are only marginally better though the air. Both of those struggles can be traced to an offensive line that couldn’t block a social media request.

“I think most of it is mental,” center Junior Diaz said. “We are a bunch of athletes. We know what we’re doing but we just don’t execute all the time.”

Oddly, the defense entered Saturday’s loss 48-14 loss to No. 18 UCF overconfident, having played Ohio St. reasonably well in the final 50 minutes of a season-opening blowout loss after allowing 28 points in the first 10 minutes.

“We just thought we arrived after the Ohio St. game but I’m glad that kind of happened,” said cornerback James Pierre, referring to the UCF loss. “It showed us we’ve got to really work for it.”

The biggest consolation FAU can take away from those performances is they came against ranked teams. Teams significantly better than the Owls. Teams FAU was supposed to lose to. There are no Ohio States or UCFs remaining on FAU’s schedule.

Kiffin should get a fairer evaluation of his Owls on Saturday when they travel to Muncie, Indiana to face Ball St. The Cardinals (1-1, 0-0 MAC) played Indiana tight in their season opener before beating Fordham. FAU actually enters the game a road favorite.

“These guys have two really good backs,” Kiffin said. “The line plays really in sync together.”

“I think these guys do a bunch of different stuff on third downs to attack your protections,” Kiffin said. “They play really, really hard, so you’ve got to fight for every yard.”

As they attempt to end the first four-game losing streak of the Lane Kifin era, FAU players on both sides of the ball say they saw a difference in attitude and aggression levels on the Oxley Center practice fields this week.

“We had a bad start but it’s looking up, now,” tackle Brandon Walton said. “We know what we need to fix. We needed that punch in the mouth to see what we really needed to fix.”