Offensive Evaluation
What worked for FAU's offense, where it still needs help and an honest evaluation of the running back unit following spring practice. 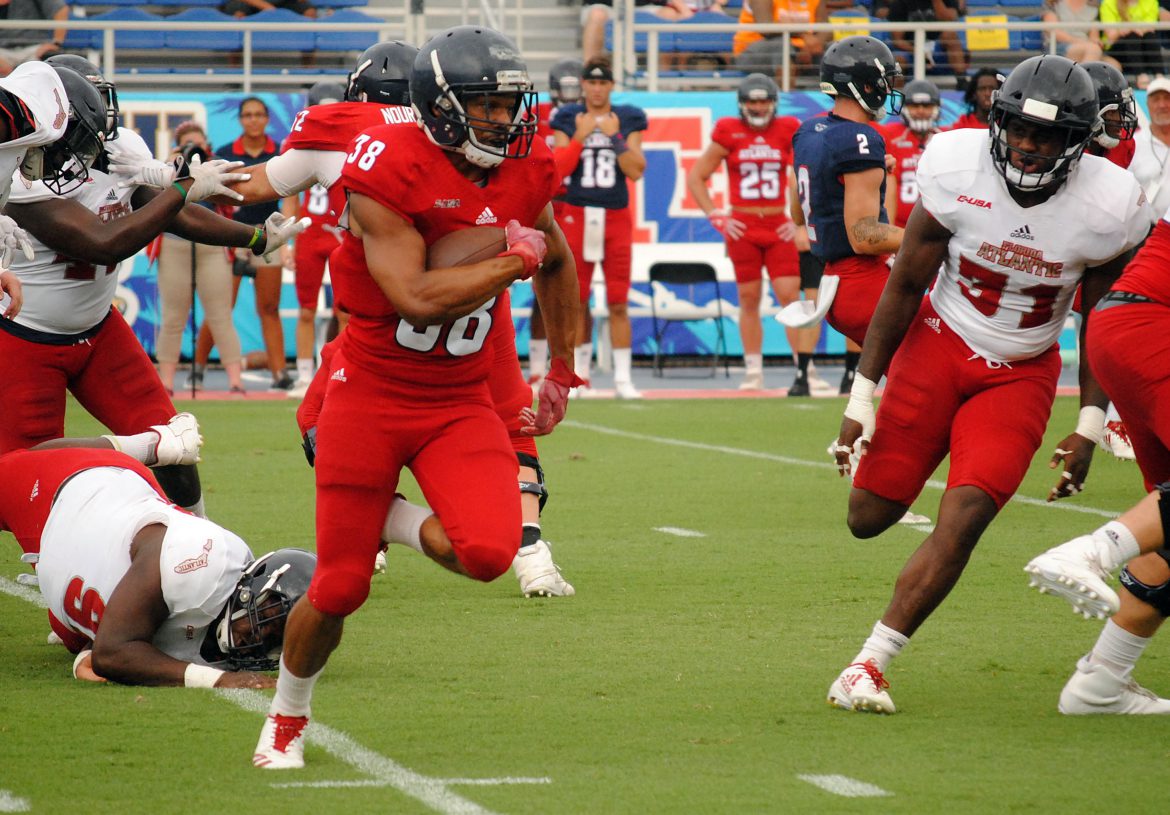 FAU running back Silver Saunders led the red team in rushing with 42 yards during the spring game. (OwlAccess.com photo)

BOCA RATON – Fifteen practices are complete. What did FAU learn about itself over the past five weeks? Today our Chuck King and Wajih Al Baroudi examine what we learned about the offense, turning our attention to the defense on Tuesday. Can this offense be as productive as the record-setting group last year? Many of the pieces are there, but there’s still a long way to go.

WHAT DO WE KNOW IS REAL?
King: Devin Singletary makes this offense go. Without the back nicknamed “Motor” FAU’s offense struggled to move the ball. Motor can turn bad plays and offensive mistakes into big plays by making defenders miss. FAU was wise to hold him out of the final two weeks of practices to ensure his hamstring injury would fully heal by the fall. Singletary has nothing left to prove. The Owls need him healthy for the season.

Al Baroudi: Great offensive tackle play. While the interior remains in flux, the bookends of FAU’s offensive line have been excellent all spring. Reggie Bain and Brandon Walton are the lone returnees from a dominant 2017 unit and will be counted on to be one of the best tackle duos in Conference USA this season.

WHAT STILL NEEDS STUDY?
King: How fast the Owls can move. FAU played with good pace in the spring game, but the Owls didn’t quite have the speed they showed last season. That’s understandable. FAU is breaking in a new quarterback and this offense isn’t part of Charlie Weis’ nature as it was for former offensive coordinator Kendal Briles, whose father pioneered ultra-fast play. Chris Robison ran the offense in the spring game faster than he had all spring, so that’s a positive. Lane Kiffin still stepped in to help with some play calls and formations – most notable when the White team had the ball.

Al Baroudi: Who will emerge as the No. 2 wide receiver behind Willie Wright? Both DeAndre McNeal and Jovon Durante flashed brilliance this spring but neither has been able to separate himself as the go-to guy on the outside. FAU needs a perimeter receiver to consistently produce so defenses can’t key on the explosive Wright in the slot. Maybe the incoming Desean Holmes or Nero Nelson will be that guy.

WHAT WILL PROVE TO BE A MIRAGE?
King: The walk-on revolution. Wide receiver Dante Cousart and running back Gerald Hearns had nice springs, but they won’t be factors come fall. Injuries and lack of depth forced them into playing time this spring. By the time the season starts neither will be on the two deep. For all the talk of Hearns making the most of his playing time, Hearns averaged less that two yards per carry over the final two scrimmages. Both of his touchdowns were invented via either a mysterious referee call in the spring game or giving the offense the ball at the 1 in the Hadley Park scrimmage. Come fall, Tyrek Tisdale will be healthy, freshman Malcolm Davidson will be on campus and the Owls are still expecting former Alabama running back B. J. Emmons to arrive this summer. And it should be noted that Kerrith Whyte outplayed Hearns in the spring game. Hearns didn’t even lead the White team in rushing on Saturday. Daniel Leconte did. For the red team, Silver Saunders rushed for nearly 20 more yards than Hearns did – and he’s listed as a safety on the official roster. Why no love for Saunders and Leconte? Wide receivers Nelson and Holmes can both play the slot when they arrive. Hearns and Cousart play with heart and have endearing personalities. Hopefully FAU’s offense will click like it did last season, giving the duo some opportunities in mop up time.

Al Baroudi: Gerald Hearns’ expanded role in the offense. The 5-foot-8 208-pound running back worked as a first-teamer for some of the spring but with a fully healthy Devin Singletary and a couple other scholarship players arriving in the fall it will be difficult for the walk-on to retain a spot in the backfield rotation this season.

WHAT IS FAU’S BIGGEST NEED?
King: Better interior line play. Kiffin noted after the spring game that offenses needed to abandon the hope of running between the tackles during the spring game because the defensive tackles were dominating. Incoming graduate transfer Junior Diaz, a starter last season at Tulane, should provide a boost at center. JUCO transfer Marcel Southall could be the answer at one guard. And Florida guard Antonio Riles, at one time a starter for the Gators, is still considering a transfer to FAU.

Al Baroudi: An answer at quarterback. With elite weapons in Harrison Bryant, Wright, and Singletary, FAU doesn’t need a superstar signal caller, just a steady presence. The million dollar question of finding that player went unanswered this spring. De’Andre Johnson and Chris Robison need to improve on arm strength and decision making respectively if they hope to win the starting job in fall camp.

Offensive Evaluation
What worked for FAU's offense, where it still needs help and an honest evaluation of the running back unit following spring practice.
was last modified: April 23rd, 2018 by FauOwlAccess
0 comment
1
Facebook Twitter Google + Pinterest 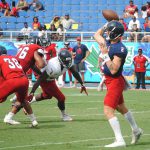