Trophy Dance
FAU grabbed the Shula Bowl trophy, then raced into the locker room, where a special guest joined the dance. Here's our GameBrowser, filled with Shula Bowl notes.

BOCA RATON – Dancing in the locker room is now a postgame tradition for FAU.

“We didn’t do anything but scream and shout, FAU linebacker Azeez Al-Shaair said of the locker room celebration. “Coach Kiffin was dancing. I think even the president was dancing at one point.”

He was, through FAU President Dr. John Kelly’s moves may not have been up to code.

“That was funny. That made my night,” Howell said. “Dr. Kelly’s got some work to do.”

TURNING POINT: FAU’s offense struggled at times in the first half, but the Owls’ drive late in the first half seemed to kick everything into gear. FAU marched 75 yards in10 plays, and quarterback Jason Driskel’s six-yard touchdown pass to D’Anfernee McGriff gave the Owls a 21-10 halftime lead. FIU would never again be within 10 points.

1 – Interception for FIU. The Panthers won the turnover battle 1-0.

2 – Times FAU held a craft beer tasting prior to games this year, once before a basketball game and again prior to the Shula Bowl. Both games were disrupted by power outages.

14 – Tackles for Azeez Al-Shaair, most in the game.

56 – Rushing yards for FIU RB Alex Gardner, who had rushed for more than 100 yards in each of the past three Shula Bowls.

1,524 – Rushing yards for Devin Singletary this season, and counting – a single-season FAU record.

UP NEXT: FAU travels to Charlotte for the final regular season game of the year. Kickoff is scheduled for 2 p.m. 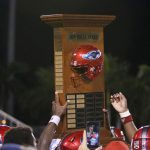 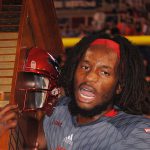