HARD KNOCKS at the OX: Turnover Game
The FAU quarterback who turns the ball over the least in Saturday's scrimmage may well be the one who starts the opener vs. Navy.

In Saturday’s scrimmage, which could determine which quarterback gets the start in FAU’s Sept. 1 opener against Navy, Kiffin knows what he wants to see, first and foremost, from quarterbacks Jason Driskel, De’Andre Johnson and Daniel Parr.

“I guess if I had to say one, it’s taking care of the ball,” Kiffin said. “These guys have turned the ball over a lot. They understand that’s the biggest thing.”

In preparation for Saturday’s scrimmage, which is open only to students, Kiffin rotated all three players through the first team.

Johnson, who had been limited most of the week, enjoyed one of his best practices in recent weeks – in several instances showing some zip on his passes that had been missing recently.

Johnson is trying to rebound from last week’s poor outing in which he completed only a handful of passes, threw an interception in the end zone and failed to lead the offense to a score.

After reviewing video of the scrimmage, Johnson said his performance wasn’t as bad as it looked.

“When I watched the tape, there wasn’t a lot that I really beat myself up over,” said Johnson, who added he’ll be looking to be sharper on his reads and checks.

Parr, the lone member of the QB battle to participate in both of the first two camp scrimmages, has moved from battling the now-departed Steven Frank for the third string spot at the start of fall camp to potentially nabbing the starting role with another strong performance on Saturday.

“Definitely the two things you’ve go to be concerned with are ball security and explosive plays,” said Parr, the only Owl to throw two touchdown passes in last week’s scrimmage. “If you win those two categories your chances to win go up exponentially”

Driskel, the most consistent quarterback dating back to spring practices, wants to keep it simple on Saturday.

“I just want to move the ball,” he said.

Friday’s practice ended FAU’s fall camp. Saturday’s scrimmage will be the final true scrimmage before taking on Navy. The Owls will hold one more scrimmage after Saturday, but Kiffin said that will be mostly situational.

Making Plays: Cornerback Korel Smith made a diving one-handed scoop of an interception. …James Brunson caught a touchdown on a well thrown laser from De’Andre Johnson. …. …Leighton McCarthy, Kain Daub and Anthony Bennett all recorded sacks. …Greg Joseph nailed a field goal of about 50 yards to cap a two-minute drill.

Tracking the Depth Chart: Defensive end Hunter Snyder has been working with the first team in recent days. “The guy that probably shows up the most every day would be Hunter Snyder,” Lane Kiffin said when discussing the Owls’ defensive line. “He had the most production points in our last scrimmage.” …Wide receiver Kamrin Solomon has been used as scout team quarterback to simulate Navy’s offense.

Instant Message: “It’s a good thing it’s not a real difficult system to learn.” – Kiffin discussing how quickly FAU can get Auburn transfer John Franklin acclimated to the FAU playbook. A wide receiver, Franklin practiced with the Owls for the first time on Friday.

HARD KNOCKS at the OX: Turnover Game
The FAU quarterback who turns the ball over the least in Saturday's scrimmage may well be the one who starts the opener vs. Navy.
was last modified: August 19th, 2017 by Chuck King
0 comment
1
Facebook Twitter Google + Pinterest 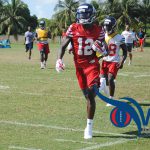 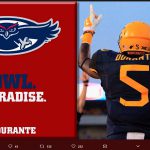