Another One Gone
FAU loses another commit, though the Owls may not be too upset about this defensive lineman's decision.

Tallahassee-Leon defensive tackle Jalon Sheffield elected to re-open his recruitment, doing so in a series of tweets Tuesday night.

At this time, my family and I have been blessed with other options which we have decided to explore

Sheffield committed to FAU while Charlie Partridge was still the Owls’ coach. New head coach Lane Kiffin didn’t appear to show much interest in keeping Sheffield on board. With only one weekend remaining until National Signing Day, the Owls had yet to set up an official visit for Sheffield.

The defensive tackle is the third commitment in as many days to change his mind about becoming an Owl. Blythewood (S.C.) tight end Roger Carter and Jefferson Davis (Ala.) offensive linemen Preston Mixon both re-opened their recruitment on Monday. Carter, like Sheffield, had committed to FAU during the Partridge era.

Sheffield told OwlAccess.com on Sunday that he visited Tennessee-Martin this past weekend and is in discussions with Tulane about a potential visit for the upcoming weekend.

The defection of Sheffield drops FAU to 11 recruits who have announced their commitment to FAU. Several other recruits who have already visited FAU have told OwlAccess.com that they liked the Owls but aren’t announcing their decision, one way or the other, yet.

Under Partridge the Owls had been planning to sign about 18 players. This past weekend Kiffin was non-committal on the size of the signing class.

FAU will host one more recruiting weekend before the Feb. 1 National Signing Day. 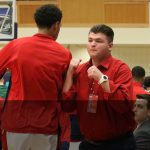