DELRAY BEACH – What does a former National Championship offensive coordinator do on a Saturday in South Florida?

One week removed from his first FAU spring game, Kiffin spent part of Saturday afternoon in Delray Beach as one of several guest scoopers at Ben and Jerry’s on Atlantic Avenue.

Team dentist Dr. Richard Staller and his South Florida Advanced Dentistry crew were some of the organizers for the event which benefited the P -4 Foundation and the Anthony Rizzo Family Foundation.

Anthony Rizzo is the first baseman for the World Champion Chicago Cubs. His brother, John Rizzo, was a key member of those first FAU football teams.

The goal for the day? To Freeze Out Cancer.

Kiffin scooped ice cream, drizzled on sauces, applied toppings and handed out the orders. He even attempted to learn the cash register.

So did all of Kiffin’s football experience give him something to draw upon as an ice cream scooper?

Kiffin won’t be seeking a career at Ben and Jerry’s any time soon, but he does feel events like this are important for him as a coach.

“For us to help out with a great cause like this is great,” Kiffin said.

To Donate to the cause, visit P4 Foundation.org or the GoFundMe page set up specifically for this event. 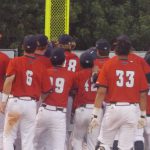