Blazing
An FAU running back wowed at FAU's Pro Day, but it wasn't the back most expected. Kerrith Whyte flew through Tuesday's workouts - and the NFL noticed.

BOCA RATAON – Two of the FAU players who declared early for the NFL draft likely helped their stock tremendously during Tuesday’s Pro Day in Boca Raton.

The most famous of the trio, running back Devin Singletary, did not.

Hoping to improve on the 4.66 40-yard dash he ran at the NFL Scouting Combine, Singletary pulled up short of the finish line during his first attempt at the 40-yard dash with tightness in a hamstring and, as a precaution, did not participate in any drills after that.

Singletary, the Owls’ career leader in yards, touchdowns and scoring, did remain on the field as others completed the drills.

His former backfield mate, Kerrith Whyte, rocketed across the finish line with an official 40 time of 4.36. Whyte also shined in other drills, displaying a 42 inch vertical leap, bench pressing 225 pounds 21 times and leaping 11 feet in the broad jump. Whyte’s long jump and high jump results were better than those of any running back at the combine.

As a junior Whyte rushed for 866 yards and eight touchdowns for the Owls. He added two more receiving scores and has the only two kickoff returns for touchdowns in program history

Both Whyte and Singletary were in demand following the workouts, meeting with representatives from multiple teams.

Jovon Durante, FAU’s leading wide receiver last season as a junior before declaring for the NFL draft, improved his 4.5 time from the scouting combine by running a 4.49.

Durante met with representative from what he called “a significant number to teams” at the combine, including representatives from Baltimore, Texas, San Francisco, Tampa Bay and Oakland and is certain he made the proper choice by turning pro.

Twenty five Owls, including 2017 wide receiver Kalib Woods, participated in FAU’s Pro Day, held at Howard Schnellenberger Field, as opposed to the artificial turf field at the track, for the first time since 2015. FAU did not report the results for Woods or former cornerback Raekwon Williams.

Coming off surgery to repair an ACL tear suffered midway through the 2018 season, linebacker Azeez Al-Shaair didn’t run the 40, but did participate in agility drills, moving smoothly.

Defensive end Hunter Snyder didn’t enjoy the Pro Day he’d been hoping for, injuring his hamstring during the 40-yard dash. He’s credited with a 4.75 run.

FAU reports that 29 NFL teams sent representatives to Boca Raton, along with three from the CFL and one from the AAF.

Blazing
An FAU running back wowed at FAU's Pro Day, but it wasn't the back most expected. Kerrith Whyte flew through Tuesday's workouts - and the NFL noticed.
was last modified: March 26th, 2019 by Chuck King
March 26, 2019 0 comment
1 Facebook Twitter Google + Pinterest 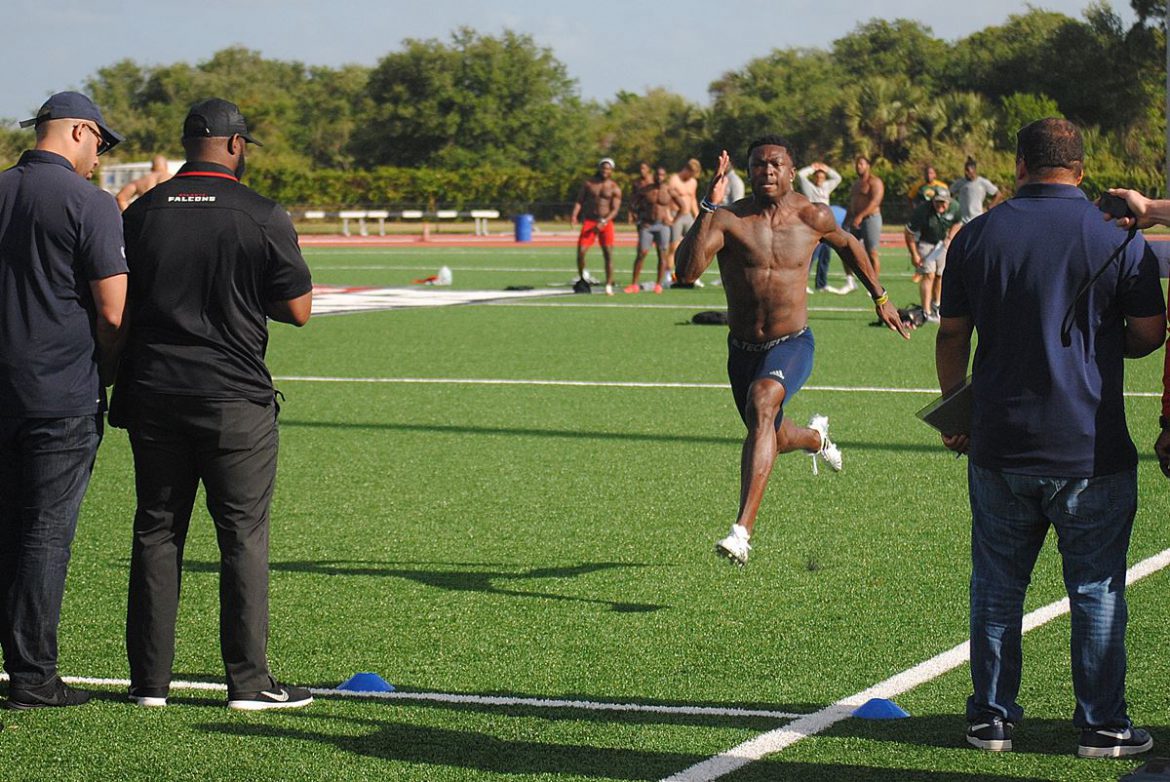 BOCA RATON – That John Franklin is fast is not news. During Tuesday’s FAU Pro Day, Franklin wanted to show he is versatile, too.

Franklin ran a disappointing 4.4 40-yard dash on Tuesday – a good time for certain but well off the 4.19 he reportedly ran during a training session.

Running, however, was only part of his day.

Franklin caught passes, threw some passes, participated in defensive back drills, and fielded punts and kicks in front of about 26 NFL scouts and three CFL scouts on Tuesday at the turf field inside the FAU track.

“I just wanted to really show that I could do multiple things,” Franklin said.

Franklin began his college career as a quarterback at Florida St. He transferred to East Mississippi, where he remained at QB while starring in the debut season of the Netflix docu-series “Last Chance U.”

From there Franklin transferred to Auburn where, after losing a quarterback battle, he moved to wide receiver. Franklin completed his career with on season at FAU.

“I felt like my receiver routes were crisp – really wanted to show that,” Franklin said.

Franklin caught seven passes for 95 yards and a score. He also rushed for 229 yards and two more scores on 16 carries.

“That’s a hard transition – to go to a position your senior year of college when other guys have been playing it forever,” Kiffin said. “I think as people look at him they are going to look at, OK, not where he is right now but where he’s going to get to once he continues to play the position longer.”

Franklin jumped 10 feet, eight inches in the broad jump, best of the day by six inches.

He elected to forego the bench press, knowing he’d need his strength for the individual workouts.

Late last week, Franklin learned he might also be asked to try some defensive back drills.

“Never played DB a day in my life but I did the drills,” Franklin said.

Racing through a disruptive wind, Franklin ran the 40 in 4.38 on one scout’s stopwatch.

Running back Buddy Howell ran the second-fastest time – a 4.52.

“Everything was smooth,” said Howell, who also caught passes on Tuesday. “I showed them I could do anything they ask me to.”

“It’s exciting for them,” Kiffin said. “Obviously a little bit different than the pro days I’m used to. These guys are chasing their dreams. It’s good to see.” 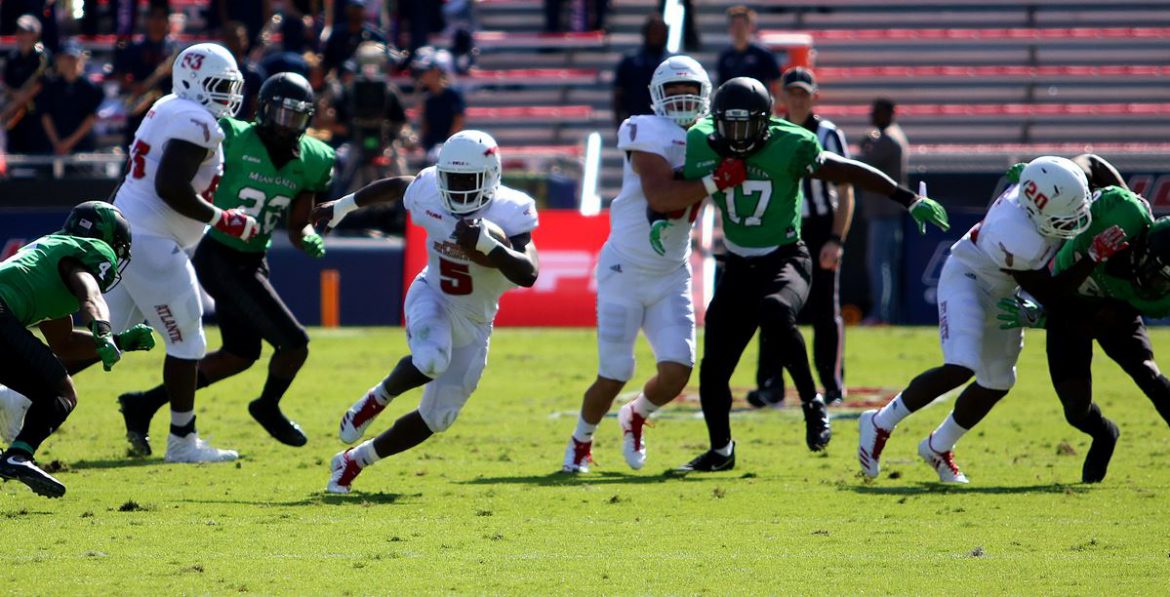 NCAA rules allow for 15 practices during the spring, with the spring game counting as a practice.

The Owls will practice on Tuesdays, Thursdays and Saturdays beginning on March 20.

The spring game is traditionally held at Howard Schnellenberger Field, but with FAU having started construction on the new Schmidt athletic center this week, it’s possible that the Owls could elect to move the game.

As part of the first phase of construction the Owls are renovating their home locker room and rooms close to it within the stadium. The Owls don’t necessarily need the locker room for the event and could potentially use the visitor’s locker room, which is smaller.

FAU also intends to hold its annual Pro Day, where NFL scouts come to campus to put seniors through a series of football-related tests such as the 40-yard dash and the broad jump, on March 27.

The non-graduating Owls will hold their fourth spring practice that same day.

Four new FAU assistant coaches will be on the field for their first FAU spring practice. New offensive coordinator Charlie Weis Jr. served as FAU’s tight ends coach for about a month last year before accepting a position with the Atlanta Falcons.

At 24, Weis is the youngest offensive coordinator at the FBS level. Also the Owls’ quarterback coach, Weis will be charged with overseeing a quarterback battle that will feature Oklahoma transfer Chris Robison, a redshirt freshman, and De’Andre Johnson, a redshirt junior. Johnson is expected to return to the field after missing nearly all of 2017 following surgery to remove blood clots in his arm.

Battles for those spots should continue into the fall. FAU currently holds four commitments from offensive linemen as part of its 2018 recruiting class, including junior college transfer Zack Bennett and Tulane transfer Junior Diaz, who should factor into the battle. Both players are centers. The Owls are also on the short list for JUCO transfer Carlton Lorenz. None of those players will arrive in Boca Raton until the summer.

Special teams coordinator Jaron Fairman served as a player development assistant last year for FAU before being elevated to his new position. The Owls need to replace kicker Greg Joseph and punter Ryan Rickel, both of whom exhausted eligibility.

All Pro
Trey Hendrickson and 10 other former FAU players did what they could to try to impress NFL scouts on Pro Day.

BOCA RATON – They ran, they jumped, they lifted and many of them slipped on the slick artificial turf field.

Trey Henrickson, the marquee player of the day, didn’t participate in many of the tests, having already gone through the process at the NFL combine.

He bench pressed 225 pounds 18 times but, as promised, did not run the 40-yard dash or the shuttle run. He did showcase quickness and power during defensive line position drills.

“The little kid in you is like, ‘this is a dream come true,’” Hendrickson said. “But at the same time, the man in me looks at it like a job interview and this isn’t even the beginning of the work that I’m going to have to put in.”

Hendickson ran an impressive 4.65 40 at the NFL Scouting Combine – sixth best among defensive lineman. That performance increased the buzz started at the East/West Shrine Game, where he was named the Most Outstanding Defensive Player.

FAU’s career sack leader with 29, the 6-foot-4, 267-pound Hendrickson could be asked to play outside linebacker for teams that run a 3-4 defense.

“Whatever they feel comfortable with me playing, I guarantee I’ll play,” Hendrickson said.

A total of 11 FAU seniors worked out in front of representatives from 27 NFL teams on Thursday.

Brandin Bryant, Trevon Coley, Randell Johnson, Cre’von LeBlanc and Sharrod Neasman, all former Owls who are currently in the NFL, joined the gallery on the sidelines.

A strong second half to his senior season brought some NFL scouts to Boca Raton to learn more about Ogbonda. On Thursday he did 19 repetitions on the bench press and ran  5.25 40-yard dash.

“I enjoyed it,” Ogbonda said of Pro Day. “The D-Line coach, he was really getting into it. He was bringing out the best of us. That was the best part. It was fun for me.”

Dillon DeBoer, whose 25 reps in the bench press were the most among Owls, likely raised his draft stock during the 2016 season by moving to center. He participated in the recent NFL regional combine held in Houston.

He also plans to attend the regional workouts for the Miami Dolphins and the Tampa Bay Buccaneers in the coming days.

“I did alright [in Houston],” DeBoer said. “I did better today than I did there.”

Defensive back Tevin Homer ran the fastest 40 of any Owl, doing so in 4.58 seconds.

All Pro
Trey Hendrickson and 10 other former FAU players did what they could to try to impress NFL scouts on Pro Day.
was last modified: March 30th, 2017 by Chuck King
March 30, 2017 0 comment
2 Facebook Twitter Google + Pinterest 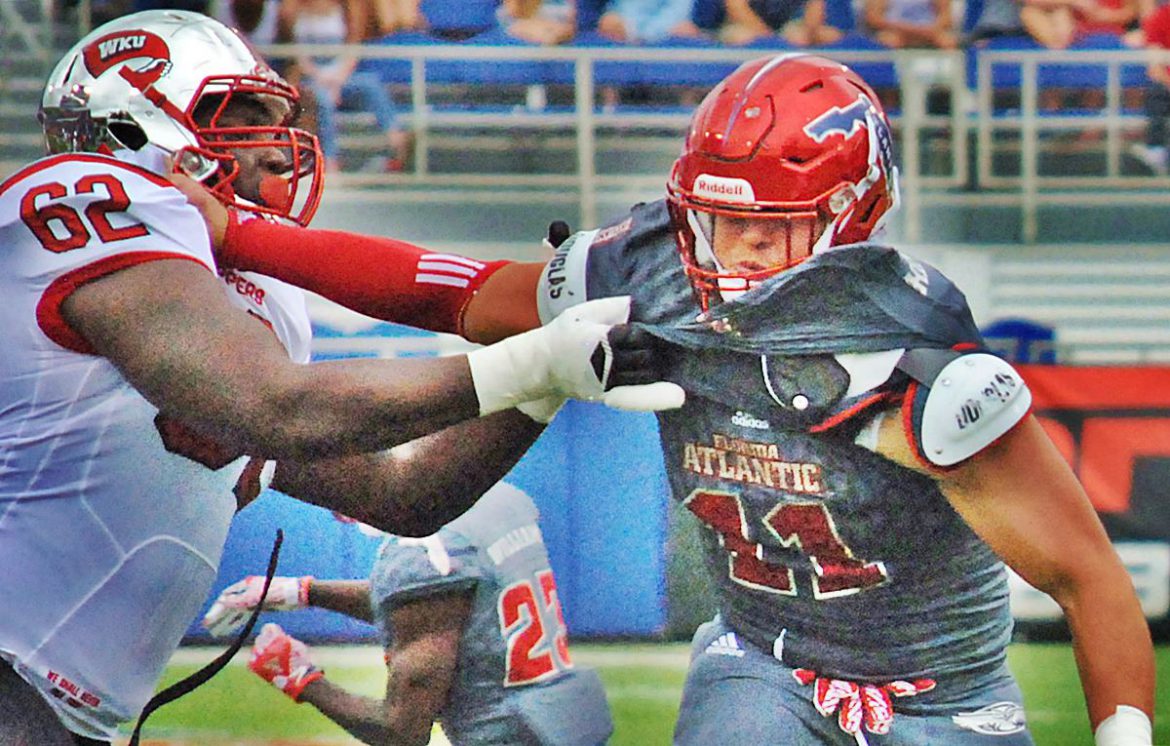 Job Interview
Former FAU defensive end Trey Hendrickson wants to perform for scouts at FAU Pro Day, but he'll skip one of the most anticipated events.

Former FAU defensive end Trey Hendrickson’s will work out for NFL scouts at Thursday’s FAU Pro Day, but he won’t be participating in one of the day’s marquee tests.

“I can guarantee I won’t be doing the 40,” Hendrickson said.

His speed is not an unknown commodity.

Hendrickson believes the risk of injury in the 40 outweighs the potential to knock hundredths of seconds off his time.

Aside from the 40, Hendrickson is looking forward to showing NFL scouts what he can do in the place where he learned how to do it.

Hendrickson was one of the lone bright spots for FAU last season, leading the Owls with 9.5 sacks despite being double and triple teamed on almost every snap.

Even with Hendrickson’s menacing presence – with 29 career sacks he’s the Owls’ all-time sack leader – FAU finished each of his final three seasons with 3-9 records.

Hendrickson met with representatives from all 32 NFL teams at the Combine and hopes to meet with several again on Thursday, when they make their annual pilgrimage to Boca Raton.

“I want to show my character and who I am as a person,” Hendrickson said. “At the end of the day I want people to know I’m a winner at heart and my record in college didn’t cripple that.”

Hendrickson wouldn’t divulge which events he’d participate in Thursday and which he would sit out, but if scouts request his participation in any certain event he’ll probably take part.

“That’s between my agent and teams, and what they want to see,” he said.

Hendrickson will be one of 12 former Owls expected to participate on Pro Day. The others are: