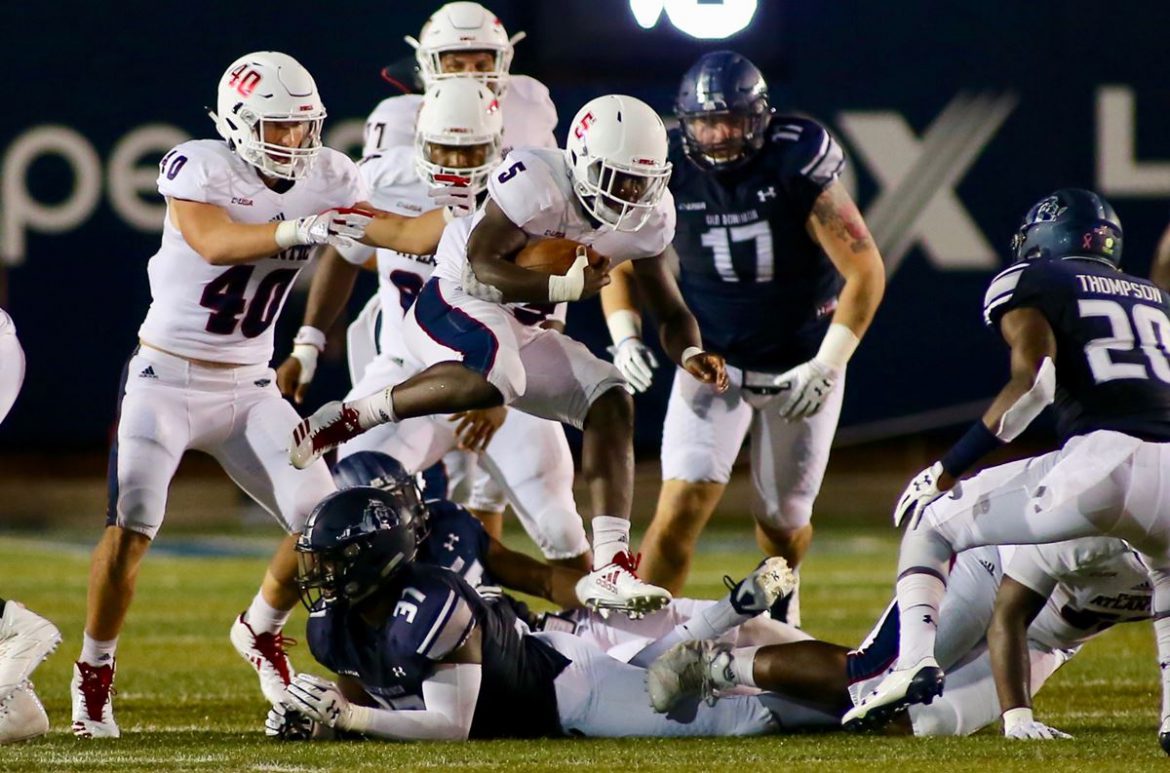 FOUR DOWN TERRITORY:
FAU 58, ODU 28
Jason Driskel's big day, another potential entrant in the quarterback battle, and the FAU Groundhogs? It's all covered in here.

Each Sunday we review FAU’s previous game, searching for the positives and negatives, the outstanding and the forgettable, from each Owl performance. Following FAU’s 58-28 victory over Old Dominion, the positives far outweighed the negatives. FAU opened Conference USA play by winning its first two games. The Owls’ running game showed no mercy against the Monarchs, rushing for 453 yards on 69 carries. We cover it all in this week’s Four Down Territory.

BIGGEST SURPRISE
Chuck King: Jason Driskel’s ability to run the ball has always been an underrated facet of his game, but no one could have predicted a 92-yard, 4-touchdown performance on Saturday. He entered the ODU game with only five career rushing touchdowns, yet in Norfolk Driskel tied the FAU single-game record with those four scores. With defenses keying on Devin Singletary and Buddy Howell, Driskel should see plenty more opportunities moving forward.

Matt Wilson: Jason Driskel has wheels. Unlike his brother Jeff, Jason is not known to be mobile. Yesterday he proved that narrative wrong by rushing for four touchdowns. That ties the FAU single-game rushing touchdown record that Singletary hit last week. He has not been as good at the passing game as Daniel Parr was when he was the starter but he leads the team better.

GAME MVP
King: FAU’s offensive line opened holes so big I could have run through them – though I probably wouldn’t have made it as far as Singletary and Driskel did. Reggie Bain, Roman Fernandez, Antonyo Woods, Jakobi Smith and Brandon Walton are jelling into one of the most formidable offensive lines in Conference USA. At this point last year FAU had started six different offensive line combinations. The Owls have trotted out the same five starters for every game this year. It shows.

Wilson: Singletary is the backbone of this FAU team. Saturday’s game was another great one, with 194 yards on 26 rushes and two TDs. He is on pace to go for his second straight 1,000 yard season. With this game, he has moved into the top 10 of the NCAA rankings in rushing touchdowns and rushing yards. He is currently tied for eighth in rushing in second in rushing scores.

CONTROVERSIAL CALL
King: The QB battle between Jason Driskel and Daniel Parr has been well documented, so it was a bit of surprise when wide receiver John Franklin entered as the Owls’ second quarterback. FAU coach Lane Kiffin said earlier in the week that the Owls were going to find ways to get Franklin, a former quarterback who possesses blazing speed, more involved. The Auburn transfer ran three plays, all runs, culminating with his 11-yard touchdown run. Don’t jump to conclusions by thinking there’s a new entrant in the quarterback battle. This was likely a package-based decision by Kiffin. Parr remains Driskel’s true backup.

Wilson: Inserting Franklin at quarterback at the end of the game instead of Parr was a surprise. Parr should have gotten reps, since he still can be the future of the team. Franklin, a redshirt-senior, came in to to run the wildcat. He scored a touchdown but Parr could have gained more experience than Franklin could have.

EXTRA POINT
King: FAU lives by the run and dies by the run. Following Saturday’s 453-yard performance the Owls rank No. 15 nationally in rushing yards per game – and that’s after posting only 40 rushing yards in the season-opener against Navy and 106 the following week at Wisconsin, both losses. Devin Singletary’s 686 rushing yards are the eighth-most nationally. His 11 rushing touchdowns trail only Auburn’s Kerryon Johnson. Maybe FAU should change their nickname from Owls to Groundhogs. The Owls biggest weakness, however, remains their rushing defense. FAU surrendered 248 rushing yards to Old Dominion, which is only a little more than the 225.8 yards they’re allowing on a weekly basis. That ranks No. 112 nationally out of 129 teams.

Wilson: Having won consecutive games and three of four, FAU has turned it’s season around since the Buffalo game. It seems like Briles has taken out of the Kiffin Alabama offense and has started to rely on FAU’s best offensive feature, the running game. Singletary and Howell are rushing well, both picking up 100-yard games and each getting at least one score against a team and injured but well-coached ODU team. Going into a bye week. FAU needs to focus on not allowing opposing teams to gain as many yards on the ground. ODU’s running back Cox gained 202 yards and had two scores on 22 carries. FAU needs to stop the run to have a shot at winning C-USA. The Owls lead the C-USA East with a 2-0 record.