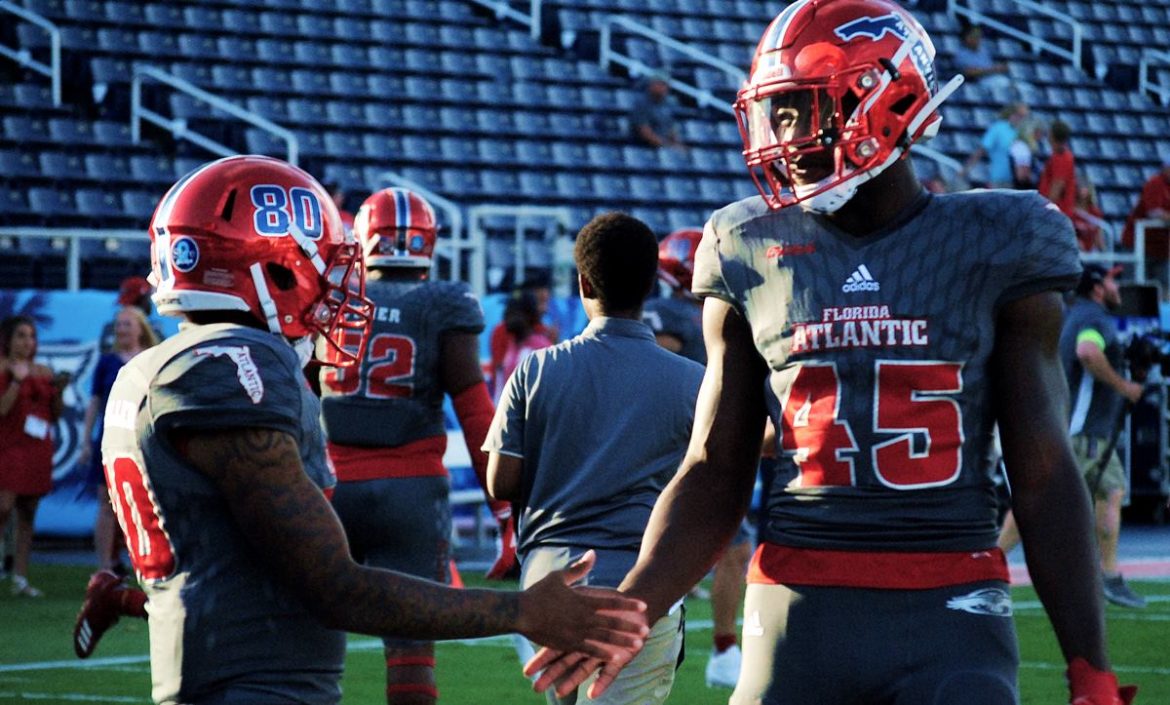 Offensive Questions
Here are five questions on the offensive side of the ball that Lane Kiffin and FAU will try to answer when spring football begins on Tuesday.

BOCA RATON – The Lane Train is about to leave the station, embarking on its second FAU journey.

Lane Kiffin and the Owls open spring football on Tuesday positioned much differently than a year ago. For starters, the Owls are winners. In its first season under Kiffin FAU won 11 games, grabbed its first Conference USA championship and claimed the Boca Raton Bowl title.

Success led to plenty of changes with the Owls, who are light years ahead of where they were this time last year. Still there are plenty of questions to answer during the Owls’ 15 spring practices. Let’s examine the five biggest questions on the offensive side of the ball.

WHO WILL PLAY QB?

What would an FAU spring be without a quarterback battle? Jason Driskel led the Owls to 10 consecutive victories to close the season, but he decided to forego his final year of eligibility and graduate. Daniel Parr, last year’s opening game starter, transferred to Duquesne during the offseason.

That leaves redshirt junior De’Andre Johnson and redshirt freshman Chris Robison to battle during the spring. Johnson began his college career at Florida St., transferring after his arrest for punching a girl in a bar. He played in one game for the Owls last season before undergoing surgery to remove blood clots in his arm. He looked good last spring but struggled in fall camp with accuracy and velocity, which potentially could be attributed to the blood clots. He’s cleared to play.

Oklahoma kicked Robison off the team before the season ever started following his arrest for public intoxication. He transferred to FAU during the summer and ran the scout team during the season. Defensive coaches raved about Robison’s talent, and Kiffin has already compared him to former Heisman trophy winner Johnny Manziel.

FAU always seems to have a spring QB battle. This one may take place at a much higher different level.

The ultra fast speed with which FAU ran its offense made the Owls special. Briles thought that fast because the offense – developed by his father, Art Briles – was second nature to him. Late last season Kiffin started making the play calls and signaling them in, attempting to learn what he could before Briles departed. Now Weis will have to undergo the same learning process.

There will certainly be hiccups and changes, but the players will also have a full year’s experience running the offense. That should count for something.

WHO WILL DO THE BLOCKING?

All-Conference left tackle Reggie Bain returns, as does Brandon Walton, who can play both tackle and guard. Richard Williams will get the first chance to replace Woods at center. Tarrick Thomas, Will Tuihalamaka, Ean Biancardi, Bryan Beck and B.J. Etienne should all be in the mix for the guard spots. Tuihalamaka and Thomas are the most experienced, but there’s no reason to believe new OL coach John Garrison will play favorites.

Jack Breshears is one player who won’t be part of the equation. A chronic shoulder issue prompted Breshears to retire from football. He is still attending FAU.

Realizing they may need help up front this season, the Owls signed junior college offensive lineman Zack Bennett, list Marcel Southall as an offensive lineman, and nabbed Tulane center Junior Diaz as a transfer. Those players, however, won’t arrive until the summer, when they will have a chance to prove they should start.

IS JOVON DURANTE FOR REAL?

As a freshman Willie Wright exploded onto the FAU scene, leading the Owls with 56 receptions and 675 receiving yards. Next up? How about Jovon Durante?

Like Robison, with whom he was able to build a rapport in the fall, the West Virginia transfer drew raves for his play on the scout team last season. Before sitting out last year in compliance with NCAA rules, Durante averaged 12.1 yards per catch and scored seven touchdowns for the Mountaineers over two seasons. He’s a somewhat proven commodity.

The loss of Kalib Woods and Karmin Solomon to graduation opens two starting spots for pass catchers. DeAndre McNeal and Pico Harrison should have a leg up in the battle for the other wide out spot, but don’t sleep on redshirt freshman Denzel Houston, who showed some big play ability in limited fall action. He’s likely a slot receiver, but Kiffin has shown a willingness to forego strict conformance to traditional roles in order to get the best talent on the field. A healthy John Mitchell could also make a bid to return to the starting lineup.

And while it could be fun to see what Auburn transfer Kyle Davis can do for the Owls, don’t get carried away with thoughts of him starting opposite of Durante in 2018. As a transfer, Davis has to sit out this season.

After rushing for 32 touchdowns, no offensive player is more secure in his starting role than Devin Singletary. With Singletary motoring to a record-setting season in 2017, it’s easy to forget that Buddy Howell also rushed for 740 yards and five scores.

Howell, however, exhausted his eligibility. To replace Howell, the Owls could elevate change-of-pace back Kerrith Whyte to the No. 2 spot, but it’s more likely that this is the spring Tyreke Tisdale breaks out.

Kiffin praised Tisdale’s physical abilities during the fall, but a knee injury limited Tisdale’s production as a freshman. Concerns about the health of Tisdale and Whyte remain, but one of them should emerge as Singletary’s backup – at least for the time being.

The battle won’t be settled by the spring game. The Owls signed Malcolm Davidson in February and still expect former Alabama running back B. J. Emmons to transfer to FAU during the summer.

Those five questions should be enough to get FAU fans ready for the passing, running and blocking. On Monday we’ll question the tackling, pass rushing and turnover generating on the defensive side. FAU will play its spring game on April 21.

Offensive Questions
Here are five questions on the offensive side of the ball that Lane Kiffin and FAU will try to answer when spring football begins on Tuesday.
was last modified: March 18th, 2018 by Chuck King
March 18, 2018 0 comment
1 Facebook Twitter Google + Pinterest