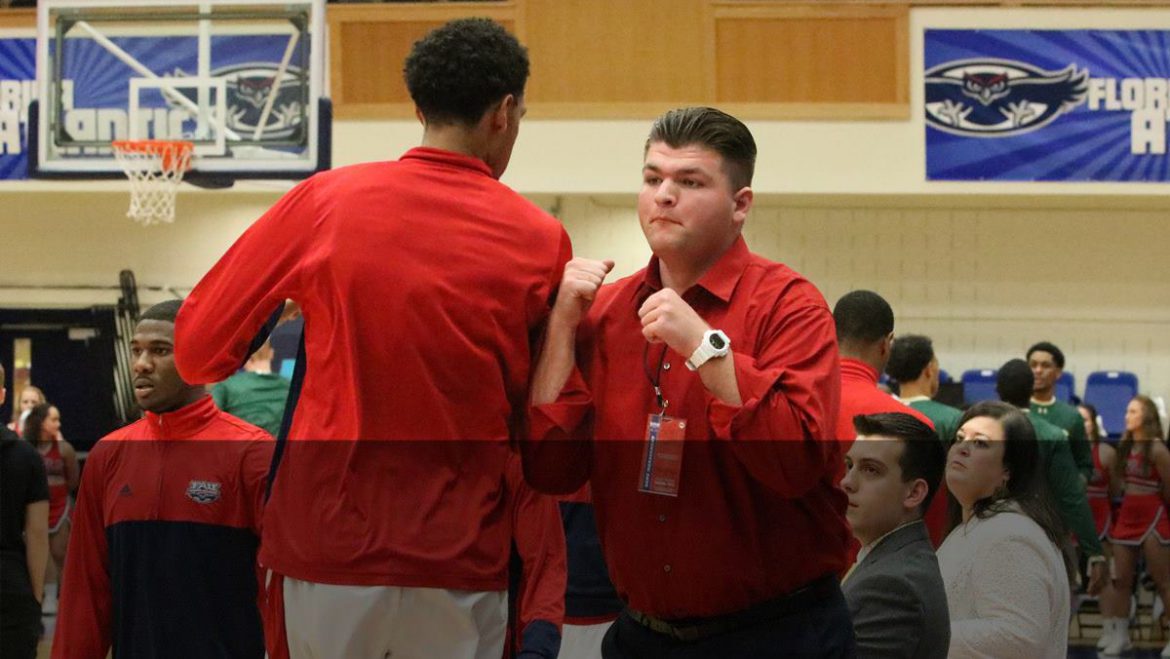 Big Rob On Campus
It doesn't matter how much the FAU basketball team struggles, the Owls always have Big Rob on the bench for inspiration.

BOCA RATON – At first glance he’s rather unremarkable – which is to say he fits into his surroundings.

At 6-foot-3 and 274 pounds, he probably would fit better in a football huddle than a lay-up line, but here he is in the minutes leading up to FAU’s Jan. 7 basketball game against FIU, mingling with players and assistant coaches on the court.

Sporting a conservative haircut that’s parted to the right – one that, a couple weeks later, would change into a modern, slicked back look – while dressed in khakis and a button down shirt he could, in fact, pass as an assistant coach. The new red adidas Ultra Boost basketball shoes on his feet, however, suggest he’s a manager or some other member of the basketball support staff.

Look a little bit closer as he moves along the bench. The motions aren’t fluid. They alternate between quasi-athletic and somewhat clumsy. He’s a 19-year-old still growing into that big body, but in a way that’s different than many basketball players who, in their late teens, suddenly find themselves a foot taller and learning to play center rather than point guard.

The one constant is a smile that produces enough energy to power an entire basketball team. It flashes while he folds towels. It remains while he ensures the players have water. He’s game ready. When the Owls huddle before tip-off, he’s right there in the middle. He’ll tell anyone that there’s not a better place to be. He’s wise.

Of the people who understand the story, what it took to get to this place in life, he’s the least awed – which in some ways is disappointing because his journey to the court is worthy of celebration.

“He told me, ‘Coach, call me Big Rob,” FAU coach Michael Curry recalls of his first meeting with Rob Black.

He’ll also answer to Rob or Robbie, and to know his name is to earn a smile and a fist bump at nearly every sighting – even when the game’s in action.

In many ways, Big Rob is the biggest kid in the arena.

As a toddler doctors diagnosed Big Rob as being developmentally delayed. By elementary school the diagnosis became Educationally Handicapped with Cognizant Disabilities– an affliction that manifested itself in both mental and physical ways.

He struggled to learn to walk, frequently tripping or crashing into walls.

It wasn’t until high school that Big Rob began to realize he was a little bit different than his peers.

“He just can’t process the way we do,” said Mary Black, Rob’s mother. “It takes him a long time to master tasks. I don’t think he tied his shoes until he was, maybe, 13 but he can tie his shoes.”

He still struggles to write or type, but he can shoot a basketball. In fact he played basketball as part of the Special Olympics program, along with bowling, and track and field.

And he also owns a personality that rapidly converts strangers into friends.

Santaluces High School students held Big Rob in such high regard that they elected him their homecoming king. He’s a member of the Boynton Beach Teen Police Academy, and hopes to stay affiliated with law enforce even after outgrowing the program because he wants to help save lives.

Big Rob’s life is not a fairy tale.

While most high school students were good to him, he also remembers being teased in high school – an occurrence which left him conflicted about becoming a college student.

FAU’s Transitioning Owls, of which Big Rob is a member, are part of a Palm Beach County post-secondary education program that allows developmentally challenged students to continue their education and receive vocational training while assimilating into college life.

This is Big Rob’s second year as a Transitioning Owl and he can remain with the program until he turns 22. Transitioning Owls are registered at FAU as non-degree seeking students, auditing one class per semester. In past semesters Big Rob studied American history, as well as film. This semester, it’s health and fitness.

Transitioning Owls, of which there are currently 10, are encouraged to participate as best they can in their classes. Mary estimates that Big Rob can do so at a sixth grade level.

It was during a Best Buddies support group gathering for the Transitioning Owls during Big Rob’s freshman year that Mary met assistant basketball coach Ron Oliver. Big Rob served as a student manager for the Santaluces basketball team, and Mary and Oliver explored the possibilities of him doing so for the Owls.

One year later Big Rob was introducing himself to Curry.

“The way the team has embraced him, it’s just been so awesome,” Mary said.

Like any student manager, Big Rob helps by rebounding for shooters and in other practice drills. He’ll participate in stretching drills during practice, often doing so next to one of his favorite players, 7-foot center Ronald Delph. Other Owls frequently shout encouragement.

Once Big Rob is loose, he ensures that towels and water are always ready when needed. He doesn’t travel to away games, (“I wish I could. Someday,” Big Rob wishes out loud) but he’s in the locker room before games, during half time and post games.

“Every now and then at halftime he’ll be standing in my spot that I stand into talk to the team,” Curry said, smiling. “I say, come on Big Rob, let me say something to them real quick.”

Around the team, Big Rob is a bundle of passion and enthusiasm – always smiling and encouraging.

He’s a Tasmanian devil of high fives. The interaction between him and the players is anything but forced. It’s warm. It’s genuine.

“He’s cool,” point guard Nick Rutherford said. “He’s really funny so he always comes in with energy. Even when we don’t have energy he always brings energy and life.”

At one point this season, Curry even used Big Rob as an example of the attitude he wants to see from his players.

“I said to the guys one day, If we come in here every day with the same amount of passion and enthusiasm as Big Rob, we’ll be alright,” Curry said.

Comments like that makes Big Rob’s smile grow even wider.

“I’m proud of that,” Big Rob said. “I’m a good role model for the team. I just have the heart and the passion.”

Ever since discovering LeBron James and the Miami Heat, Big Rob always wanted to be part of a team. If it could be a basketball team, even better.

Mary Black drove Big Rob to the FAU vs. FIU game like she does for most practices and home games. She elected to sit in the student section to watch the game – directly across from the FAU bench. Watching the games is a bit of a rarity for her.

“He wants to do this on his own,” Mary said. “When he first started he didn’t want [his father] Bob and I involved. [He’d say] ‘Don’t come into the practices, mom. Wait outside for me mom. I’ll tell the coach. I’ll make sure I find out mom.’”

Despite Big Rob’s injection of energy, FAU’s season isn’t going the way the Owls would like. Even when FAU held a double-digit second half lead over FIU, there remained a feeling of uneasiness throughout The Burrow.

The Panthers cut the lead to four points with less than 4 minutes remaining before the Owls pulled away for their fifth win of the season.

As the horn sounded Big Rob, of course, was among the first to dispense high fives. He tracked down guard Adonis Filer at the far baseline to execute a celebratory chest bump followed by a series of hand slaps.

“That’s pretty much what we do,” Filer said. “We have our own handshake that he does every time he sees me. I see him on campus all the time and he’s always smiling and always in a good mood. I go out of my way to make sure I speak to him. He just lifts my spirits every time I see him because of how happy he is and how enthusiastic he is.”

“I love school,” Big Rob said. “I’ve got the good education. I’ve got the basketball team.”

Big Rob On Campus
It doesn't matter how much the FAU basketball team struggles, the Owls always have Big Rob on the bench for inspiration.
was last modified: January 24th, 2017 by Chuck King
January 24, 2017 2 comments
6 Facebook Twitter Google + Pinterest