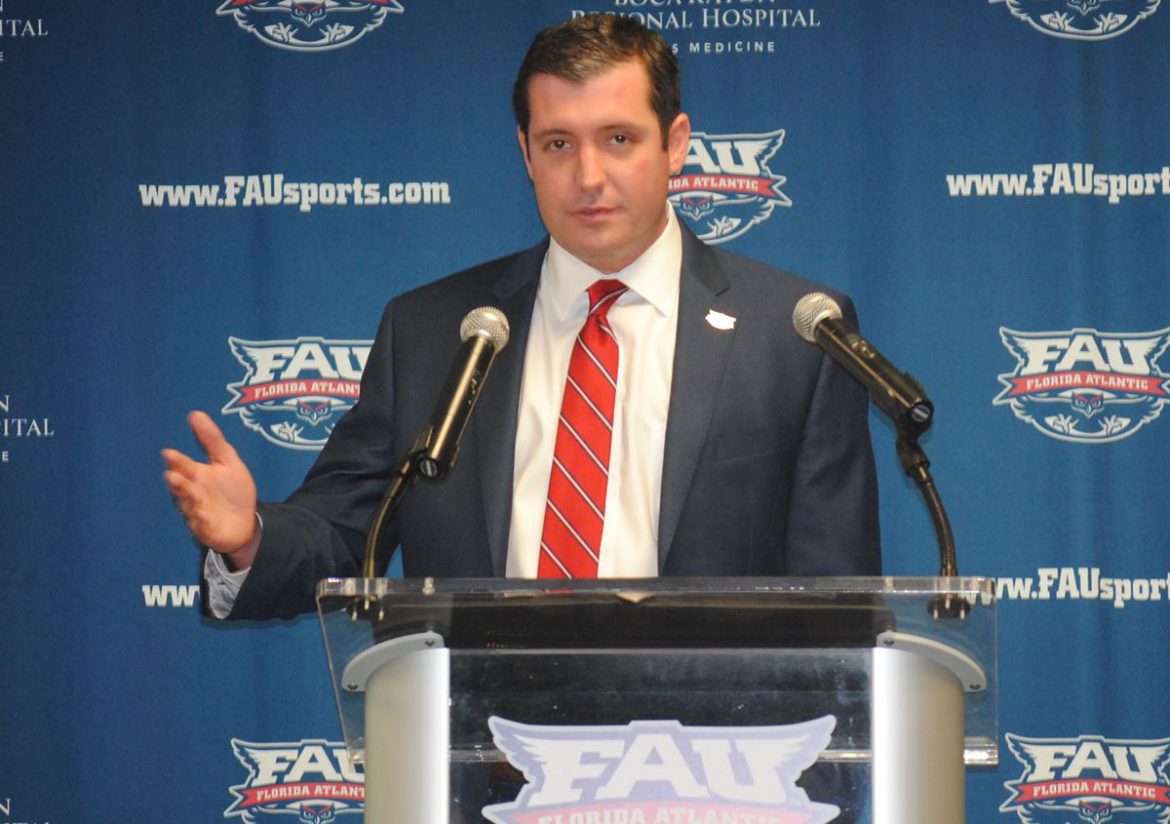 The New Boss
New FAU AD Brian White says the presence of Lane Kiffin played a major role in his decision to accept the Owls' job.

Turns out Kiffin also has the ability to recruit bosses.

New Florida Atlantic athletic director Brian White cited Kiffin one of the primary reasons he left Missouri to take over the Owls.

“The fact that he’s at FAU is pretty exciting to me,” White said. “It was a draw.”

FAU formally introduced White to the public on Wednesday. He replaces Pat Chun who left FAU in January to accept the same position at Washington St.

“We were looking for a winner and we found a winner,” FAU president Dr. John Kelly said.

White’s father, Duke University athletic Director Kevin White, and brother Danny, the AD at Central Florida, attended press conference. His brother Mike, the basketball coach at Florida, did not. The Gators are preparing for their opening round game in the NCAA tournament.

Most FAU coaches also attended the introductory press conference, though Kiffin did not.

That didn’t keep the unconventional head coach from being a frequent topic of conversation.

“I think for us, we’re in the business of creating excitement, engaging the fan base, getting people to games, generating resources – and I think a guy like Lane helps all those things,” White said. “You want to win and he’s doing that at a high level. For us, it’s really exciting to have a guy that is obviously really talented at what he does, obviously really good at what he does. I think it’s a huge asset.”

Kiffin took over a team that went 3-9 in three successive seasons and in his first year led the Owls to an 11-3 record, the program’s first Conference USA championship and the Boca Raton Bowl title.

Never strong to begin with, the relationship between Kiffin and Chun soured to the point of near non-existence by January.

While Kiffin’s candid personality and off-the-cuff Twitter account can produce conflict, White didn’t see any of that as a concern. He’s ready to take over as conductor of the Lane Train.

“If Lane has a really successful program, I probably have a pretty successful athletic department,” White said. “We have the same interests. I haven’t had a lot of difficulty working with coaches. I enjoy it. I try to take pride in having an understanding for what they’re thinking – to go get in the fox hole a little bit and understand that that’s a hard job.”

While Kiffin led a successful turnaround, Michael Curry’s basketball program continues to struggle. The Owls recently completed a 12-19 season – their best record in Curry’s four seasons – and once again lost in the first round of the C-USA tournament.

Under Curry, wins on the court have lagged behind successes – academic and otherwise – off the court.

Kelly said he would let White determine whether the Owls will bring back Curry next season for the fifth year of his six-year contract.