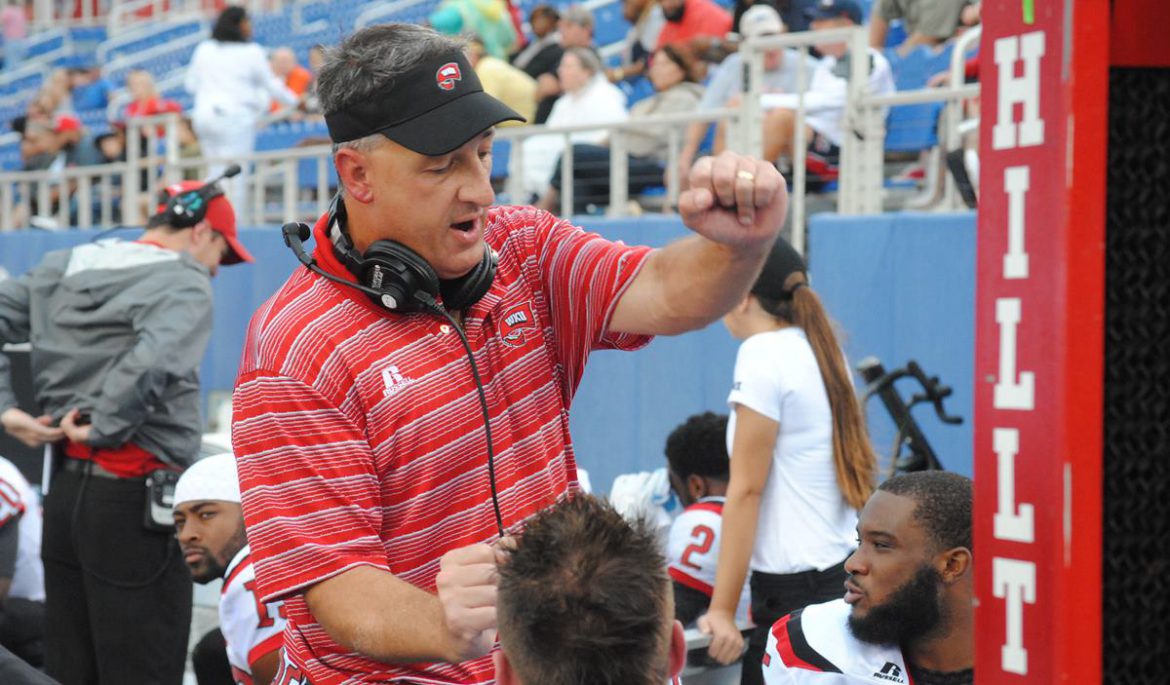 BOCA RATON – Later today Dale Williams will walk into a room he hasn’t entered in more than five years and will do so once again with an uncertain future.

Now he’s back in town with the Hilltoppers, who will be dressing in the home locker room of FAU’s football stadium when the Hilltopperss prepare to face Memphis tonight in the third annual Boca Raton Bowl.

“It’s been good to come back, see a lot of people and obviously show some people I can still coach,” Williams said. “When we left FAU, everybody thinks we were terrible, we were 1-11, this and that, but it was a trying year because of Howard retiring [in August, effective at the end of the season] and then you go through a whole season that way.”

Following that 2011 season Williams moved down to the high school level, working as a physical education teacher and an assistant football coach at Lake Worth. After two seasons Williams accepted the head coaching spot at Boca Raton-Olympic Heights, but left before the season started to join a business outside of football.

He didn’t get back into coaching until this season, re-connecting with his former FAU colleague Jeff Brohm at WKU.

If Williams suffered any rust from the lay-off, it’s hard to identify now.

“I came in and just wanted not to screw it up,” Williams joked.

Under Williams’ guidance the Hilltoppers developed into one of the best offensive lines in the nation. Earlier this month Pro Football Focus ranked WKU’s line No. 4 in the nation, behind only Alabama, Auburn and LSU.

The accolades are nice, but Williams is simply happy to have that “winning feeling” back.

Western Kentucky enters the Boca Bowl with a 10-3 record. One of those wins came in a 52-3 beat down of FAU in late October.

Williams had been back to South Florida as a recruiter for WKU, but that marked his first game at Howard Schnellenberger Field since the season it opened – before it even had that name.

“It was different to walk in there the first time as a non-Owl,” Williams said. “Once the game goes on you forget about all that stuff and you just play.”

“To see something different would have been nice – go to Hawaii or the Bahamas – but my daughter and son are happy because they are all back to see their friends,” he said.

Williams’ future beyond the Boca Bowl is cloudy. Brohm accepted the coaching position at Purdue and is no longer with the team. The Hilltoppers hired Notre Dame offensive coordinator Mike Sanford to replace Brohm last week.

Williams believes he’ll know in the next 10 days whether he’ll be offered a spot on Brohm’s staff with the Boilermakers, receive the opportunity to remain at Western Kentucky or have to look elsewhere for coaching employment.

“Being the good Catholic that I am I’m sitting here in purgatory,” Williams said. “I don’t know what is going to happen.”

Now that he’s proven he can still coach, Williams hopes the Boca Bowl will serve as Exhibit A of what he can bring to a coaching staff.

“I figure, just play (Tuesday) and that’s my one final resume on TV,” Williams said.