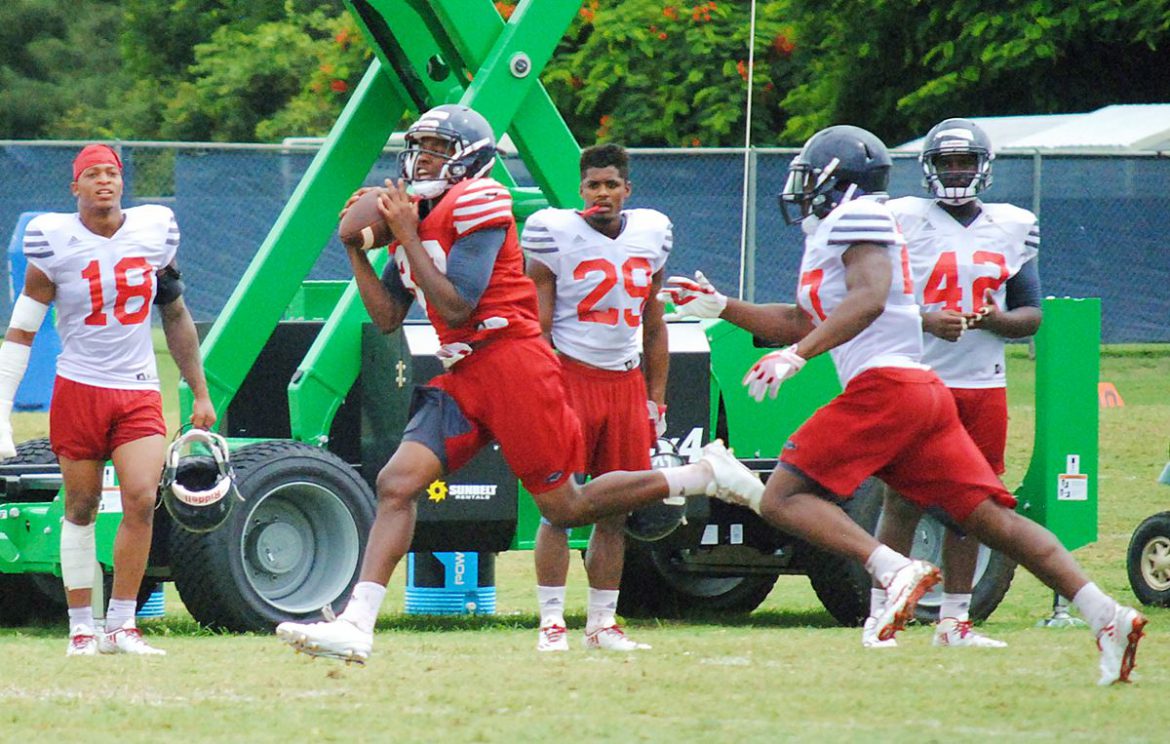 On Wednesday McNeal had the opportunity to learn from one of his idols when Johnson, now retired, stopped by the FAU football offices.

“I loved every single bit of it,” McNeal said.

Johnson, AKA Megatron, met with all the receivers and even broke down video some one-one-one routes from current Owls, offering tips and suggestions.

He also answered questions ranging from beating press coverage, to adjusting to a ball in flight, to off-the-field preparation.

“All you are thinking about is, I’ve got to get a picture at the end, but he was really good,” wide receiver Ladante Harris said. “It was really good just learning from a guy that’s at a higher level and taking some advice from him.”

Making Plays: Nickel Herb Miller enjoyed a huge afternoon, intercepting two passes – turning one into a Pick 6 – and recording a sack. …Henry Bussey caught an easy 10-yard touchdown pass on a quick slant from De’Andre Johnson during seven-on-seven drills. …Marcus Clark ripped off a 40-yard touchdown run around the right side. …DaiKwon Fuse and Damian Horton combined on a sack that ended the scrimmage portion of the practice.

Tracking the Depth Chart: Raekwon Williams and Shelton Lewis are the first team corners. Chris Tooley and Korel Brown comprise the second team. Based on Thursday’s practice, the fifth corner appears to be J’Quan Napier. …Unless something radical happens, Antonyo Woods will be the starting center, but on Thursday he also took some repetitions with the second team at right guard. Woods can play all five spots along the line.

QB Battle: Prior to Thursday, the only time Daniel Parr worked with the first or second team during full-team scrimmage was when Johnson or Jason Driskel was unavailable. On Thursday Parr joined Johnson and Driskel on the main practice field. Johnson worked with the first team (it was his day in the rotation) while Parr and Driskel split time with the second team. More about an interesting quarterback day here.

Newcomer Watch: Playing safety, Zyon Gilbert recorded a sack. …Defensive end Tim Bonner also notched a sack. …Denzel Houston hauled in a deep pass from Daniel Parr for a big gain in the two-minute drill. …At one point in the full team scrimmage portion of the day Gilbert and James Pierre were the second-team safeties.

Instant Message: “Even though I tweet about it, I don’t really follow presidential races, so I don’t know what that means.” – Lane Kiffin responding to a question about whether having Parr practice side-by-side with Johnson and Driskel makes him look more like a starting quarterback, similar to the way having political outsiders stand on the debate stage with political heavyweights can make the outsider look more presidential.

Bonus Instant Message: “We can go into our indoor facility – Oh, we don’t have one.” – Lane Kiffin joking about how FAU will handle practice should it rain again on Friday. FAU hopes to officially break ground in August on a new football complex that will eventually contain an indoor practice facility.