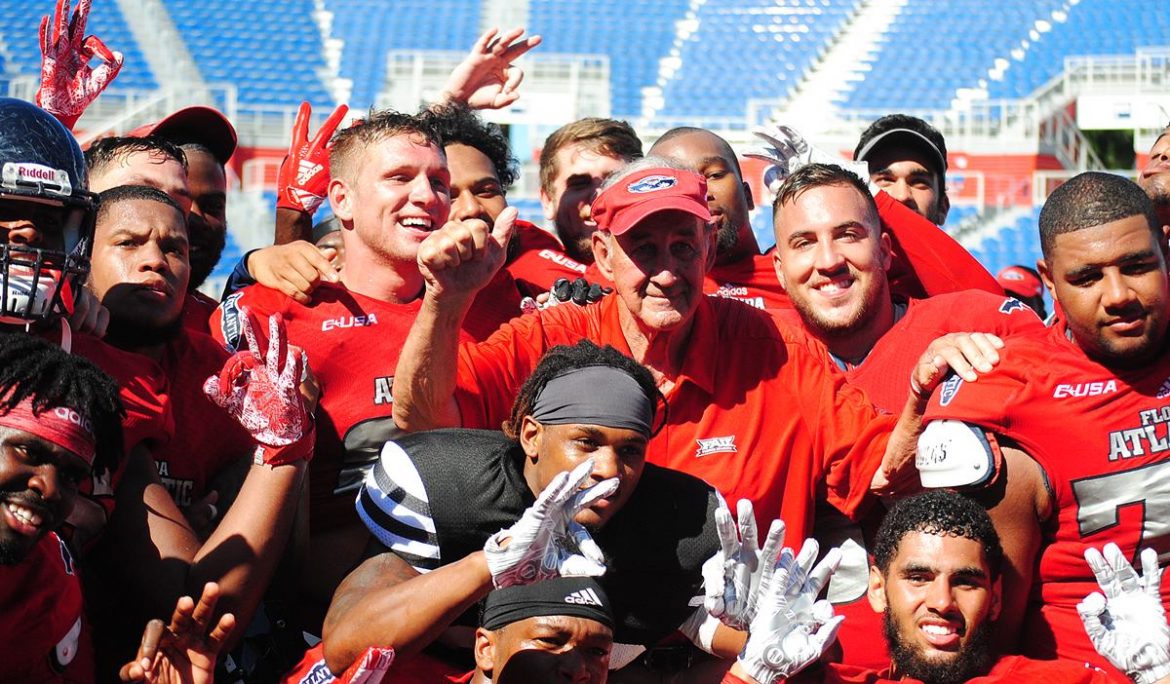 BOCA RATON – An afternoon that started with erratic quarterback play and a rare spring game ejection culminated in an all-too-familiar missed field goal, prompting Monte Kiffin to dance to the music of James Brown.

Sophomore walk-on Christian Hoyo’s 43-yard field goal on the final play of FAU’s 2019 spring game sailed wide left, allowing the Red team to hold on for a 17-16 victory over Gray.

“”I thought in general, the defense played really well,” coach Lane Kiffin said. “The offense struggled. When you’re playing yourself, there’s good and bad in everything. It was good in the second half to see players make some plays especially John Mitchell, for a receive to step up.”

Tight end Harrison Bryant caught two touchdown passes to lead Red. The first one came via Nick Tronti, who zipped the ball between safety Da’Von Brown and linebacker Akileis Leroy. The two defenders collided allowing Bryant to saunter into the end zone for a 36-yard score. Bryant’s second touchdown came off the arm of Trent Wessel, his roommate, on a drive set up by safety Teja Young’s interception of Cordel Littlejohn.

Mitchell started slowly, dropping one pass because of a Young hit and mistiming his jump on another throw, but ultimately matched Bryant’s performance for Gray. Cornerback Diashun Moss fell down as Mitchell broke for the post on his route, allowing Justin Agner to throw one of the easiest 71-yard touchdown passes of his career.

Agner and Mitchell hooked up again for Gray’s other score, this time connecting on a jump ball from six yards out with less than two minutes remaining.

All three of Mitchell’s catches came in the second half and covered a total of 148 yards.

“He made some more competitive, tough ones late,” Kiffin said of Mitchell’s catches. “That was good to see because that’s what I feel like we missed last year.”

Gray, coached by defensive coordinator Glenn Spencer, elected to go for two, but Agner was denied when officials ruled that defensive end Damian Horton tracked him down in the backfield for a sack. Playing with a throwing hand injured during practice earlier in the week, Agner arrived at the postgame press conference with his hand heavily wrapped.

Tronti completed 16 of 32 passes for 160 yards and that lone TD. Agner had one more touchdown but also threw and interception and fumbled a snap. His 12 completions on 32 attempts covered 266 yards. Agner added another 44 rushing yards.

“I thought they started slow and made some mistakes,” said Lane Kiffin, assessing the overall quarterback play. “They played better in the second half.”

Monte Kiffin, chosen by the Red team as their coach, promised to dance in the locker room if he coached Red to victory. After the win Monte, father of Lane and a defensive analyst for the Owls, got down to James Brown’s “I Feel Good.”

The game was stopped for a few minutes in the first half because of a fight. Defensive end Tim Bonner chased Wessel to, and over, the far sideline, hitting him once he was well out of bounds.

Wessel’s teammates, including Bryant, John Raine and B.J. Etienne, jumped to Wessel’s defense. Ultimately a scrum ensued, with Bonner being ejected for throwing a punch.

By winning the game, players on the Red team receive a steak dinner. Gray players will attend the same meal, but will be fed hot dogs.

Unlike past seasons the spring game doesn’t conclude FAU’s spring practices. The Owls will practice Tuesday and Thursday before holding one final scrimmage on Saturday. Neither of those three practices are open to the public.

This story will be updated throughout the evening. 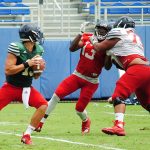 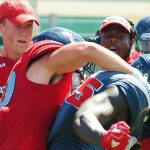