Red is the New Orange
At one point in their lives LB Rashad Smith and DB James Pierre intended to play at Syracuse. They chose FAU instead, becoming leaders of the Owls' defense. 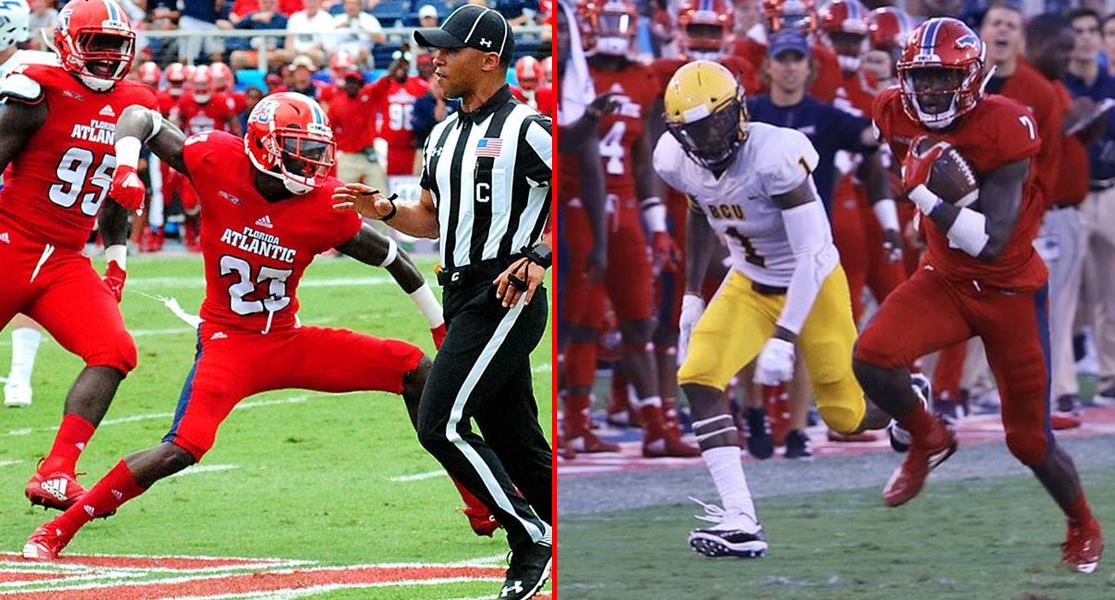 BOCA RATON – Linebacker Rashad Smith and defensive back James Pierre, arguably the Owls’ two most effective defensive players through the first half of the season, often work in tandem – as though they were destined to be on the same field.

That field was nearly located in Syracuse, New York.

Smith originally committed to play for the Orange before officially flipping his commitment to the red, white and blue of FAU on Signing Day.

“I had red socks,” Smith recalls. “When I put them on I knew I was gong to FAU.”

To be safe, however, he avoided phone calls on the way to sign his National Letter of Intent.

“Syracuse called me that morning,” Smith said. “I didn’t answer. I just had my mind made up, because if I answered the phone I probably would have reconsidered everything.”

Pierre took his commitment a step further, actually signing with Syracuse in 2016. Family and academic issues, along with his dislike of traveling, kept Pierre from ever heading to upstate New York.

One year later Pierre effectively became a free agent, and schools like Oklahoma and Kansas tried, once again, to lure him out of state.

“When [FAU coach] Lane Kiffin called me, and knowing (Devin “Motor” Singletary) personally from Deerfield Beach, I was coming here,” Pierre said. “I just knew it.”

When Singletary, arguably the best player ever to wear an FAU uniform, learned the Owls landed Pierre, he couldn’t believe his, and Florida Atlantic’s, good fortune. Singletary was going to play with a youth league legend from his hometown.

“He was always special,” Singletary said, “Growing up, in little league he played all over the field. He was always making plays, always scoring touchdowns. He was always around the ball. Just to be playing with him now, that’s kind of like a dream come true, to be honest.”

Pierre’s played safety, corner and nickel for the Owls since arriving last season. As a true freshman, he recorded 21 tackles while playing in all 14 games.

This year, Pierre moved into the starting lineup for the season’s second game and has been there ever since. Playing nickel and corner, Pierre’s big hits – often sending ball carriers flipping through the air – litter the defensive highlight videos each week.

One play, however, stands out. Through four games the Owls’ defense had yet to force a fumble. That changed when Pierre punched the ball out of the arms of MTSU quarterback Brent Stockstill, a fumble defensive end Ernest Bagner fell on.

To Smith, the play reminded him of the “Peanut Punch” former Chicago Bear and Carolina Panther Charles Tillman wielded to help create 44 fumbles during his 13-year NFL career. To head coach Lane Kiffin, it was one of the top highlights of the season.

“I think James’ play is probably a favorite play of the year so far because you can get fumbles where it just happens to come out. He went and punched the ball out, away from the quarterback,” Kiffin said. “You could see his excitement because they’ve been trying so hard.”

A junior, Smith recorded 99 tackles and forced one fumble last season but hasn’t created a loose ball yet this season. It’s about the only statistical category where his production hasn’t excelled. Smith’s 51 tackles currently leads the Owls, as do his three interceptions.

Smith lines up next to Conference USA preseason Defensive Player of the Year Azeez Al-Shaair on most defensive plays, and while Al-Shaair remains the defense’s emotional leader, halfway through the season it’s Smith who’s making a bid for postseason awards.

“When I got here I didn’t know there was another person like Azeez,” Pierre said. “When I saw (Smith) play I was like, he’s just like Azeez. Both of them are similar. They work hard together. They are always together. I see him and Azeez the same.”

As a freshman, Smith followed Syracuse, catching games when he could on television. Pierre watched the Orange’s loss to Clemson two weeks ago as a means of killing time before the Owls’ nighttime kickoff at MTSU.

Neither regrets their decision to forego playing at a Power 5 school to play closer to home in Conference USA.

“Best decision I made in my life,” Pierre said. “Growing up, I never made good decisions and I finally had this decision to make on my own and I feel like I made the best decision of my life.”

“I made the right decision,” he said.

Red is the New Orange
At one point in their lives LB Rashad Smith and DB James Pierre intended to play at Syracuse. They chose FAU instead, becoming leaders of the Owls' defense.
was last modified: October 10th, 2018 by Chuck King
0 comment
1
Facebook Twitter Google + Pinterest