And to the record book as well.

FAU defeated Air Force 33-27 in its home opener behind a historic performance from redshirt-freshman quarterback Chris Robison and a clutch defensive play from Rashad Smith.

“He played how we really thought he was going to play,” Kiffin said of Robison’s prolific performance. “It was good to see it come together.”

The Owls had special teams miscues rear their head for the second straight week – this time nearly costing them the game. FAU (1-1) had a punt blocked and recovered for a touchdown with less than a minute remaining, bringing Air Force (1-1) to within six points.

The Falcons then recovered the ensuing onside kick after the ball bounced off a player on the FAU hands team.

Rashad Smith put an end to the Falcons’ comeback efforts, picking off an Isaiah Sanders pass to seal the victory for FAU. Same notched a career-high 16 tackles on the day.

The game-saving interception from Smith was FAU’s first defensive takeaway of the year.

After some early miscommunications, the Owls’ passing game was ignited on a third quarter scoring drive which saw both Pico Harrison and Jovon Durante catch deep balls from Robison. Durante’s 48-yarder down the seam found the end zone.

FAU settled for field goals on its first two offensive possessions – struggling in the red zone after sustaining positive drives between the 20s – but eventually found paydirt in the second quarter with a 36-yard Devin Singletary touchdown run.

Outside of scoring the game’s opening touchdown, Singletary was held in check by the Falcons’ defense, rushing for 57 yards on 11 carries. He was held under 100 yards for a second straight week after coming into the year on a streak of 12-straight games reaching that mark.

Singletary would have broken the century mark if not for a would-be 75-yard touchdown run in the fourth quarter being negated by a holding penalty.

He was happy with the win, but Singletary was less than thrilled about his long score being taken away. “You don’t want to see anything come back, you want to keep points on the board.” He said.

Jovon Durante was a big reason why Robison was able to have his record-setting performance. The former West Virginia Mountaineer was a dynamic threat from all across the formation, gaining 174 yards on 12 catches, outracing defenders on both jet sweeps to the sideline and deep routes down the field.

The week-by-week mentality they developed over that incredible turnaround has remained a focus in 2018.

“Every week you want to win that game. So it’s really just 1-0 that week,” Linebacker Azeez Al-Shaair said. “Keep trying to get that one win everytime and they are going to keep on piling up.” 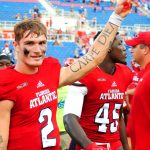