BOCA RATON – It’s do or die time for FAU.

Actually, every week is do-or-die time for FAU from here out. Unless they don’t. Then the question becomes moot.

FAU faces Western Kentucky on Saturday in what is essentially an elimination game in the chase for Conference USA’s East division. Both teams have lost one game in C-USA and are tied with Marshall atop the division.

The Owls can’t afford a loss this week. What do they have to do to get that much-needed win? That’s one of the major topics covered this week on OwlTalk With Brian Rowitz, the first and still finest FAU football podcast.

This week Rowitz of ESPN West Palm fame and our Chuck King briefly look back at the Owls easy victory over Old Dominion last weekend before turning their focus toward the showdown of former Sun Belt Conference teams.

Lane Kiffin and the Owls head to chilly Bowling Green, Kent., a banged-up squad. Starting quarterback Chris Robison and starting running back Malcolm Davidson both left the victory over ODU with first-half injuries and did not return.

What’s the status of the Owls’ QB entering Saturday’s contest? Who can make plays at the running back position. And do the Owls have to win this game, and eventually the C-USA East, for this season to be considered a success? All fair questions. All discussed in OwlTalk.

Finally the duo tackles the NCAA’s decision from early this week to pursue a set of rule changes that would allow student athletes to be compensated for the use of their likenesses. Will this ever actually happen? If it does, will that mark the end of the NCAA as we know it? Will such a rule further divide FAU from the elites of college football?

Plenty of informed opinion here, and even some humor. So give the OwlTalk FAU football podcast a listen. It will make you a better fan.

Hilltop Talk
What does FAU need to do to defeat WKU? Who will play QB? Is a C-USA title still realistic? Those questions and more addressed on the OwlTalk FAU football podcast.
was last modified: October 31st, 2019 by FauOwlAccess
0 comment
0
Facebook Twitter Google + Pinterest 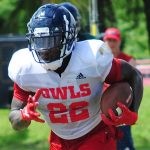 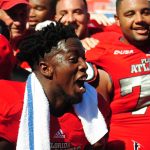