Four Down Territory:
UCF 48, FAU 14
FAU bungles the game day experience, enjoys a celebritry sideline and has even more issues on offense than previously thought.. 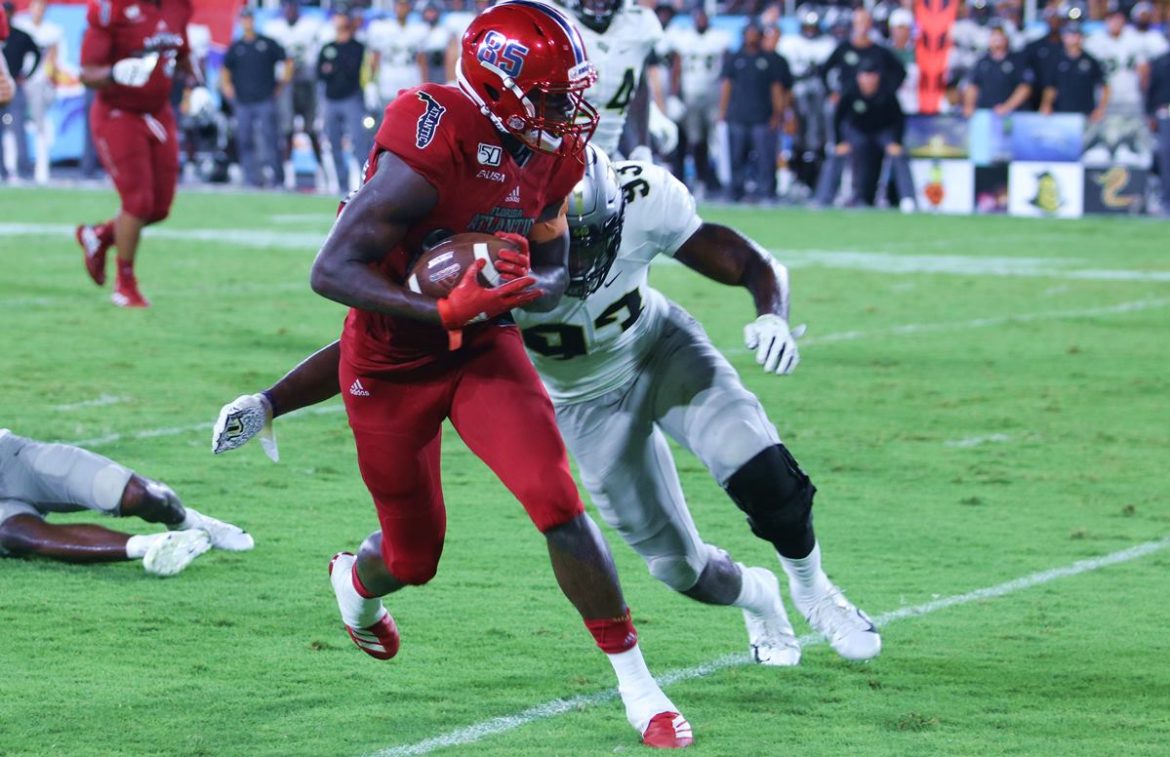 FAU WR John Mitchell makes one of his two catches against UCF. (Photo by Bongo)

BOCA RATON – There simply aren’t many positives to take away from FAU’s 48-14 loss to UCF.

The No. 18 team in the nation, the best team in the state of Florida, came to Howard Schnellenberger Field and thoroughly thumped the Owls in all three phases of the game.

Yes, UCF is the better team, but for the second consecutive week FAU looked feeble in front of a national television audience.

So what do we take away from Saturday’s game? Here’s our Four Down Territory analysis.

BIGGEST SURPRISE
FAU’s 2019 home opener had some nice touches – the paradise field boxes, new LED lights – but as bad as the Owls played on the field, Florida Atlantic failed even worse off the field. The horrific game day experience began well before kickoff when FAU inexplicably struggled to create a traffic flow on campus. The new Spanish River exit from I-95 backed up all the way past the off-ramp bridge that crosses 95 – and that was two-and-a-half hours before kickoff! As many as 10,000 fans missed kickoff because ticket takers/security guards at metal detectors couldn’t get them through the front gates in time – and that includes VIP fans lucky enough to use the club entrance. Many fans missed the entire first quarter, and once inside stood in long lines for beer and concessions.

An excuse offered by multiple FAU administrators for the long wait to enter the stadium, that fans failed to heed the advisory to enter the gates early, simply doesn’t cut it – and is in fact galling considering how long fans had to wait to simply pay for the privilege of parking. FAU embarrassed itself by crowing about a sellout, then having so many empty seats shown on television because fans who paid to see the game couldn’t get into the stadium. Fans who decided to give FAU football a shot for the the first time can’t be blamed if they never come back.

CONTROVERSIAL CALL
For the second consecutive week FAU won the coin toss and elected to defer their choice to the second half. For the second consecutive week the Owls’ opponent elected to go on offense first and needed less than two minutes to take the lead. Deferring the decision to the second half makes sense if your defense is dominant or there’s a chance of impending foul weather, but neither was the case in the first two games. Lane Kiffin is known as an offensive guru. The Owls need to take the ball when they win the coin toss and put opponents on the defensive.

EXTRA POINT
Two weeks into the season FAU wide receivers have tallied a total of 16 catches. Only four receivers have caught passes, and the two catches credited to slot receiver Willie Wright, who has completely regressed since his scintillating freshman receiver, lost 10 yards. Yet wide receiver may only be the second most concerning unit for the Owls’ offense. FAU’s offensive line didn’t allow quarterback Chris Robison much time to throw and opened precious few holes for the running backs. Kiffin expected the Owls’ offense to struggle early, but he didn’t foresee this. 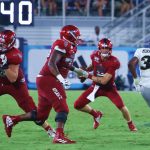