FOUR DOWN TERRITORY:
Charlotte 27, FAU 24
A late 56-yard Charlotte field goal ended one of the most frustrating FAU seasons in program history.

BOCA RATON – FAU’s season ended on Saturday night with a 27-24 home loss to Charlotte, concluding one of the most disappointing years in the football program’s history.

FAU began the season with hopes of cracking the Top 25, yet never found any traction once the season kicked off. The preseason pick to win Conference USA failed to become bowl eligible, ending the season with the first losing recording in Lane Kiffin’s collegiate coaching career.

Each week following the game our Chuck King and Wajih AlBaroudi examine the good, the bad and the curious from FAU football with our Four Down Territory Analysis.

BIGGEST SURPRISE
King: Kiffin didn’t re-insert quarterback Chris Robison into the game for the final drive. Robison played the first three quarters but Kiffin elected to turn to De’Andre Johnson after the offense stagnated in the second half. Johnson moved the ball with his legs, but the Owls needed a quick strike in the final seconds, and Robison’s bigger, more accurate arm gave the Owls their best – albeit still slim – chance at driving for a game-tying field goal.

AlBaroudi: FAU’s offensive implosion in the third quarter. A seamless first half saw the Owls on pace for a whopping 610 yards of offense. But it looked like a different team appeared in their place after the halftime break. FAU managed only 56 scoreless yards in the third quarter, nearly a third of the 152.5 they averaged over the first two quarters. It’s tough to put a finger on what exactly went wrong for the unit. But whatever the reason, it was the final blow to the Owls’ 2018 season.

GAME MVP
King: Tight end Harrison Bryant caught five passes for 86 yards. FAU quarterbacks finally began looking downfield for Bryant and he consistently rewarded them with big games. FAU also incorporated John Raine into the game plan, and he responded with a walk-in TD. It’s a mystery why FAU neglected a weapon like Bryant for much of the season.

AlBaroudi: Hunter Snyder. Despite it coming in a losing effort, there isn’t much of a better way to end a college career than the way Snyder did last night. The senior defensive end was a force on the edge, collapsing the pocket with ease to put constant heat on Charlotte quarterback Hasaan Klugh. Tied for the team lead with six tackles, Snyder added a sack and a tackle for loss. He could have had a second sack with a tackle on Klugh in the backfield but the play was ruled a run because of the quarterback tucking the ball down.

CONTROVERSIAL CALL
King: Charlotte coach Brad Lambert had several options when facing a fourth-and-five from the FAU 39 in the final minute. He could have punted and forced overtime. He could have tried to earn a first down, thereby getting the 49ers into more realistic field goal range. Lambert went with a third option. Deciding that the 49ers were close enough already, Lambert turned to Jonathan Cruz, who drilled a 56-yard field goal with plenty of room to spare. Had he missed the kick, FAU would have had the ball near midfield. But he drilled it. And Charlotte celebrated.

AlBaroudi: Coach Lane Kiffin electing to kick a field goal with 3:12 remaining rather than going for a fourth-down conversion. Quarterback De’Andre Johnson pumped some life into the Owls offense in the final frame, driving his team down the field with a chance to either tie the game with a field goal or take the lead with a touchdown. But when FAU hit fourth down in Charlotte territory, Kiffin had a decision to make. And the result of that decision came to the surprise of many. Kiffin went for the tie with kicker Vladimir Rivas. FAU came into the game leading the nation in fourth-down conversion attempts (39), so to not see an aggressive call in that scenario was odd to say the least.

EXTRA POINT
King: FAU didn’t deserve to go to a bowl this season – not judging by the Owls’ play, anyway. The only consistent aspect of their play this season was that they kept making the same mistakes from the beginning of the season until the finale. FAU couldn’t convert third downs. Defense couldn’t make big stops. The special teams were unreliable – to be kind. Perhaps most shocking of all was to see how many Owls were smiling and posing for photos with members of Charlotte after the game. FAU’s season had been over by minutes, and many Owls didn’t seem to care.

AlBaroudi: Noah Jefferson showed exactly how much of a game-wrecker he can be at the heart of the FAU defensive line. Receiving his biggest snap share of the season, the 6-foot-5 330-pound defensive tackle delivered on his extended playing time with a dominant performance. The former USC Trojan was feasting on Charlotte’s interior line, eating up blocks to free up his counterparts on the edge to make plays. But he also shared in the stat-sheet stuffing himself. Jefferson had a season-high five tackles and a sack. And like Snyder, Jefferson had a tackle on Klugh near the line of scrimmage that could have easily counted as a second sack. 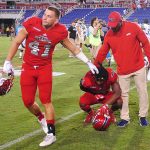