BOLD PREDICTIONS:
FAU vs. ODU
FAU takes to the air in the red zone, the defense continues to improve and the Owls' playcalling gets more agressive in Saturday's ODU vs FAU game. 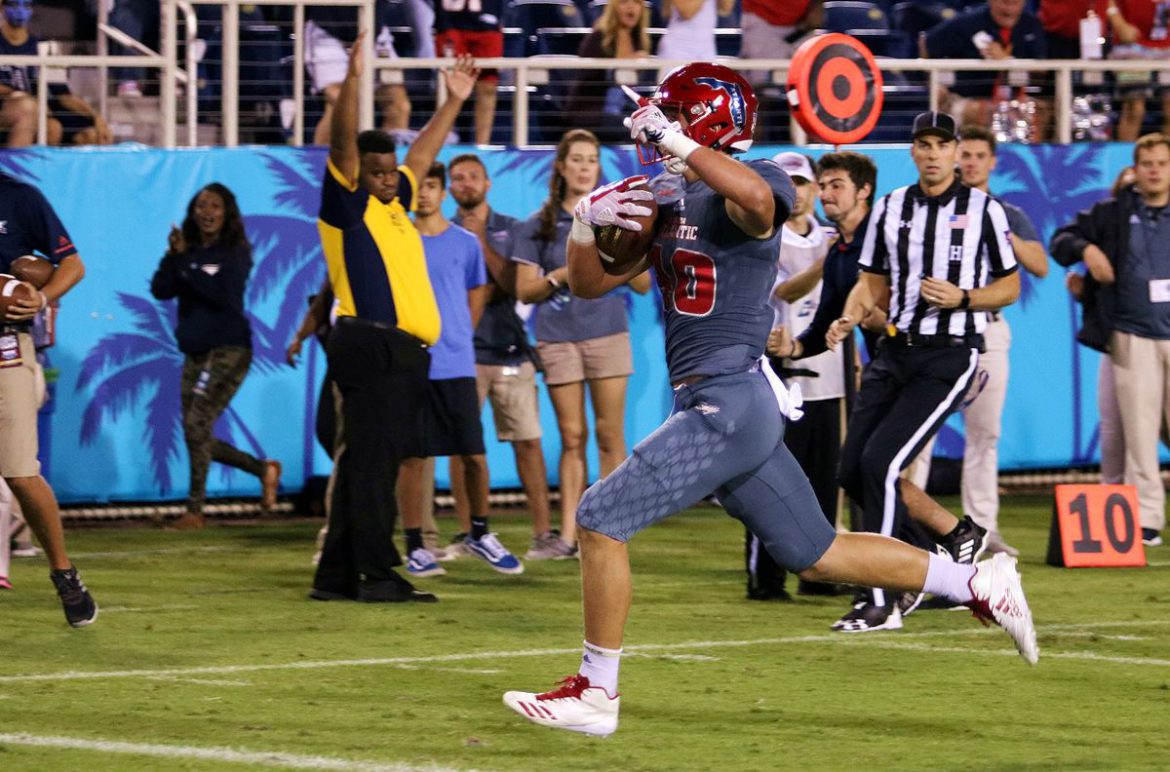 FAU TE Harrison Bryant eases into the end zone for the first touchdown of Shula Bowl XVI. (Photo by Bongo)

BOCA RATON – It’s been more than a year since FAU found itself in this position.

The Owls are coming off a loss to a Conference USA team for the first time in 10 conference games. Saturday’s loss at MTSU was the first C-USA loss for FAU since coach Lane Kiffin took over.

The Owls’ inconsistent play this season makes them an unpredictable bunch. One week redshirt-freshman quarterback Chris Robison is setting program records. The next he’s back to playing like a freshman.

Running back Devin Singletary finds the end zone every game, but he’s been bottled up more this year than he was in either of his first two seasons. At times Kerrith Whyte has looked like the featured back – which isn’t necessarily bad for the Owls considering Whyte would start on most, if not all, C-USA teams.

The FAU defense played its best game of the season in Saturday’s loss to MTSU, but still has plenty of room to improve. Sacks have been scarce and turnovers even scarcer. And the Owls continue to struggle defensively during the two-minute drill.

So, yes, it’s difficult to predict which Owls will take the field on any given week. But that won’t stop us from trying. Each week our Chuck King and Wajih AlBaroudi offer our Bold Predictions for that week’s game. Here’s what we expect from ODU vs. FAU this week.

FAU OFFENSE vs. ODU
King: John Mitchell becomes a weapon for the Owls. FAU’s downfield passing game has been missing for much of the year. The incorporation of another speedy receiver should help that down the road, but with ODU featuring talented defensive ends, Robison may not have the necessary time to launch bombs. Mitchell is also a big body with excellent hands. He’s someone who Robison can look for in the red zone, and on Saturday Mitchell, who missed all of last year and entered for only one play this season, opens a new dimension for FAU’s offense.

Wajih AlBaroudi: Harrison Bryant scores in the red zone. After hauling in five receiving touchdowns last season, Bryant has yet to hit paydirt though five games of 2018. His blocking has been excellent thus far, helping open up lanes for a conference-leading 16 rushing touchdowns on the year, but to deploy him only in that role is an indictment of the production he can bring through the air. In the red zone this season, FAU has scored 13 rushing touchdowns to only two passing – something opposing teams will grow cognizant of and start selling out on to defend. If Old Dominion takes that strategy this Saturday, the Owls will need to have an alternative in the red area. And what better alternative than a 6-foot-5 weapon in Bryant who proved last season he can be a dominant threat in short-yardage situations.

FAU DEFENSE vs. ODU
King: The turnover spigot opens and the Owls’ defense drinks. Through five games the Owls’ defense has only forced four turnovers – three Rashad Smith interceptions and one Ernest Bagner fumble recovery. Two of those turnovers came in last week’s loss at MTSU. Lane Kiffin likes to note that turnovers tend to come in spurts. ODU quarterback Blake LaRussa is only making his second start of the season and sixth overall. An FAU defense that seems close to finding itself produces at least three turnovers on Saturday, turning one into a touchdown.

AlBaroudi: FAU’s pass rush has a breakout week. The defensive line has started slowly this year, notching only four sacks through five games, but all signs point to that turning around on Saturday with the unit getting close to full strength. Defensive end Hunter Snyder is back after battling an early-season injury, tackle Marcel Southall seems to have grasped the playbook and is now an integral part of FAU’s rotation up front, and there is a chance former USC Trojan and JUCO transfer Noah Jefferson makes his long-awaited debut. Old Dominion has struggled in pass protection this season, giving up a conference-high 16 sacks on the year. Only 14 teams in the country allow a higher per-game sack rate than the Monarchs’ 3.20.

FAU vs. ODU WILDCARD
King: FAU needs a new alarm clock. The MTSU loss is at least the third time this year that FAU players have referred to the previous week’s game as a “wake-up call.” Answer the phone already. The Owls have played well at home this season, and that trend continues on Saturday. The offense still sputters at times, but it also hits some big plays, achieving a comfortable cushion and enabling the Owls to be the first home-team winner in the history of this five-game series.

AlBaroudi: Aggressiveness both in play-calling and effort will not be an issue for FAU against Old Dominion – regardless of the score. Last week the Owls fell flat after jumping out an early 21-3 lead over Middle Tennessee, losing 25-24 on a final-minute Blue Raiders touchdown and ensuing two-point conversion. A similar showing came on FAU’s turf two weeks prior, where after going up 29-0 on Bethune-Cookman in the first, the Owls were outscored 14-7 in the second. Those two games comprised a wake-up call for FAU. It reminded them the importance of stepping on the throat of opponents instead of letting up when they go ahead. If the Owls once again start strong this week, expect them to keep attacking until the final whistle blows.

BOLD PREDICTIONS:
FAU vs. ODU
FAU takes to the air in the red zone, the defense continues to improve and the Owls' playcalling gets more agressive in Saturday's ODU vs FAU game.
was last modified: October 4th, 2018 by FauOwlAccess
0 comment
2
Facebook Twitter Google + Pinterest 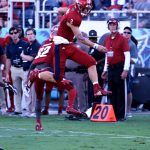