Bold Predictions:
FAU at No. 16 UCF
FAU's offense opens the playbook, its defense stuggles against a high-powered offense and the Owls fair better in this nationally-televised contest than they did vs. Oklahoma. 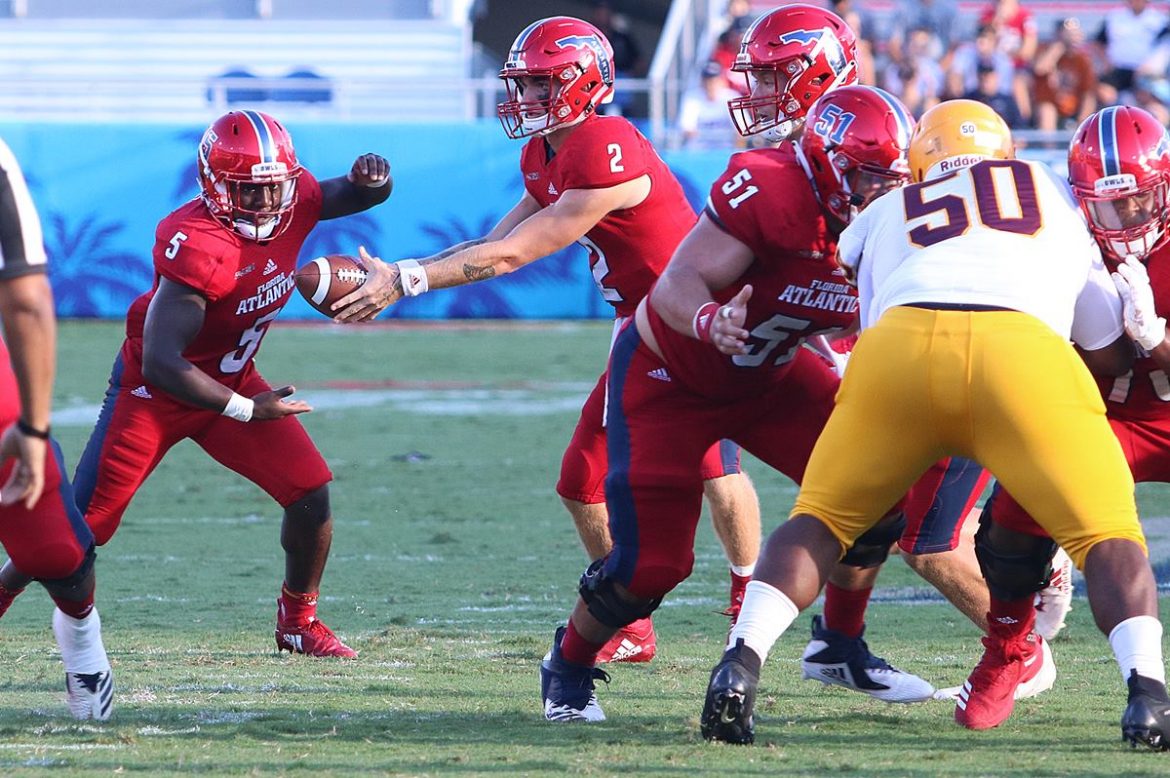 BOCA RATON – Florida Atlantic began the season against a ranked team – No. 7 Oklahoma – and didn’t acquit themselves well in a 63-14 loss.

The Owls have another shot at a ranked team on Friday, traveling to Orlando to face No. 16 Central Florida.

The Knights are riding a 15-game winning streak, which includes their first two games of the season. To pull the upset, FAU must slow an offense averaging more than 600 yards per game and will likely have to score at least 40 points.

Can the Owls do it? We’ll learn on Friday. While the anticipation builds, we’ll add to the hype with our bold predictions for the FAU vs. No. 16 UCF game.

FAU OFFENSE vs. UCF
Chuck King: Playing a ranked team and a state rival in a nationally televised game, Lane Kiffin opens the playbook. FAU’s offense has been rather vanilla over the past two weeks. Kiffin opts for double chocolate swirl on Friday, allowing Robison to look deep often. And Robison won’t be the only Owl throwing the ball. Wide receivers or running backs could air it out. The Owls will try multiple trick plays – and at least one will produce a touchdown.

Wajih AlBaroudi: Chris Robison runs for 50-plus yards. FAU fans are well aware of what the Texas native can do with his arm after seeing him throw for a school-record 471 yards against Air Force. What Robison can do with his legs has yet to be unveiled. The redshirt-freshman showed flashes of that potential last week, picking up 42 yards on four carries, but there is still room for that part of his game to be utilized more within the offense. Robison is a plus athlete – ran a 4.69 forty in high school – which will help him exploit a UCF defense that has hemorrhaged 117.5 rushing yards per game to opposing passers to start the season.

FAU DEFENSE vs. UCF
King: FAU’s defense surrenders at least 42 points. The Owls will have to outscore the Knights to pull an upset. Earlier this week Kiffin compared UCF’s talent to that of SEC teams. The offense has scored on everybody, and the Knights will score on FAU. The game may come down to the Owls needing to make one late defensive play – a red zone interception, perhaps – to secure a victory.

AlBaroudi: Cornerback James Pierre locks down wide receiver Tre Nixon. At 6-foot-2, Nixon owns a size advantage over most defensive backs that helps him win down the field on contested-catch opportunities. That will not be the case this week. Pierre matches Nixon in height, negating that ability to make plays over the top of defenders. Life will be uncomfortable out on the perimeter for the Ole Miss transfer Nixon, as Pierre’s length and physicality will alter the timing on his routes and create miscommunication with quarterback McKenzie Milton.

UCF WEEK WILDCARD
King: FAU will exit Friday night’s contest without having a kick blocked. That might not seem all that bold of a pick, but the Owls haven’t made it through a game yet this year without having a kick blocked. Oklahoma and Air Force both blocked a punt. Bethune-Cookman blocked an extra point. The Owls will limit their exposure to punt blocks on Friday by continuing to take offensive chances on fourth down.

AlBaroudi: FAU will bounce back on the national stage after how it performed against No. 7 Oklahoma. It was not a perfect storm for the Owls in Week 1. Their quarterback was starting his first ever game, doing so at his former school. Three new interior offensive linemen were learning to play together, and new coordinators on both sides of the ball were still settling into their respective roles. That 63-14 season-opening loss was a learning experience for the Owls. And it helped prepare them for this very game. Unlike Oklahoma, who is stocked with blue-chip talent from top to bottom, these two teams are on the same Group of Five level. On paper they are equal, meaning this game will come down to attention to detail and execution. FAU will step up to the challenge and put out a much stronger effort in this nationally televised game than their first of 2018.

Bold Predictions:
FAU at No. 16 UCF
FAU's offense opens the playbook, its defense stuggles against a high-powered offense and the Owls fair better in this nationally-televised contest than they did vs. Oklahoma.
was last modified: September 20th, 2018 by FauOwlAccess
0 comment
1
Facebook Twitter Google + Pinterest