Whyte Makes Right
Kerrith Whyte entered 2018 as a reserve running back in search of carries and emerged as a game-breaking performer and a potential lead back for FAU.

BOCA RATON – FAU entered the 2018 with plenty of holes to fill offensively. And while running back wasn’t one of the most prominent needs, there was a sneaky void to fill.

That is, if you can call replacing Buddy Howell, the 6-foot-1, 220-pound battering ram of a running back, sneaky.

The Owls knew they could rely on starter Devin Singletary, who scored more than 20 rushing touchdowns for the second season. The question the Owls needed to answer was, Who would spell Singletary?

At 5-foot-10 and 200 pounds, Kerrith Whyte isn’t a big back like Howell, who provided thunder to go with Singletary’s lightning. Whyte is plasma – an electron in an excited state.

A third down back most of his career, Whyte essentially split carries with Singletary late in the season, and at times proved to be the more electrifying back.

A redshirt junior, Whyte rushed for 866 yards on the season, averaging 6.5 yards per carry – highest among C-USA backs with at least 20 carries. He also caught 10 passes for 160 yards and two touchdowns.

His 75-yard touchdown reception on a jet sweep – essentially a handoff – on the first play from scrimmage against Charlotte was certainly one of FAU’s top offensive plays of the season.

Whyte emerged as a potential every-down back for next season, should Singletary elect to enter the NFL draft in the coming days. His running and kick return skills likely elevated Whyte onto several NFL draft boards – which, with Howell currently a member of the Houston Texas, would make him the second back-up to Singletary to sign an NFL contract.

Quarterback Chris Robison, the Conference USA Freshman Co-Offensive Player of the Year, gets some consideration here, but he really didn’t have much of a baseline from which to measure growth. And with Robison’s inconsistency throughout the season, it’s difficult to quantify him being that much better late in the year than he was at the beginning.

Junior right tackle Brandon Walton took a big leap forward in 2018, once again starting every game for the Owls. It will be interesting to see whether Lane Kiffin asks Walton to move to the left side in 2019 to replace graduated four-year starter Reggie Bain or whether Walton continues to be a mountain on the right side.

Whyte Makes Right
Kerrith Whyte entered 2018 as a reserve running back in search of carries and emerged as a game-breaking performer and a potential lead back for FAU.
was last modified: December 11th, 2018 by Chuck King
0 comment
1
Facebook Twitter Google + Pinterest 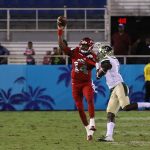