Under The Rainbow
FAU falls to 0-2 on the season with loss to SIUE in Hawaii.

FAU is quickly learning that its trip to Hawaii is no vacation.

The Owls fell to Southern Illinois-Edwardsville of the Ohio Valley Conference 77-68 on Sunday in FAU’s second game of the Rainbow Classic held in the nation’s 50th state.

The loss dropped FAU to 0-2 on the season. The Owls have one more game in tournament, a 4:15 a.m. tip-off against host Hawaii on Tuesday, before returning to the mainland.

FAU trailed by seven at the half and drew within three early in the second half on two Nick Rutherford free throws before the Cougars pulled away. SIUE led by as much as 16 before FAU put together a late run.

The Owls closed the gap to seven on two more Rutherford free throws in the final minute but couldn’t get any closer.

Up Next: FAU concludes its trip to Hawaii with a 4:15 a.m. Tuesday contest that will be broadcast live on ESPN 2. 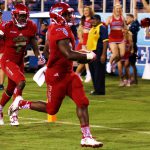 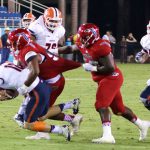